Are women ecologists joining the race?

“It is not enough to be industrious; so are the ants. What are you industrious about?”
—Thoreau to H.G.O. Blake, 16 November 1857

In 1997, Richard Primack and Elizabeth Stacey published an article entitled “Women ecologists catching up in scientific productivity, but only when they join the race.”

They studied the publication record of tropical ecologists (328 men and 328 women) at various stages in their careers. One main result was that women have lower rates of publication than men, in both younger and older ecologists. Women published, on average, only 60% of the number of articles that men published. 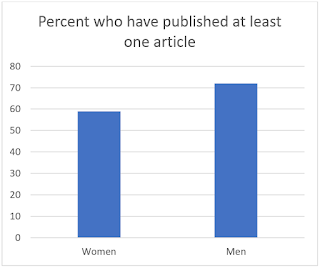 In the group, nine men had consistently high rates of publication, but none of the women did.  A number of women were late bloomers with increasing rates of publication later in their careers, perhaps caused by lack of time due to family responsibilities.

The silver lining in this 22-year-old study is that women are starting to catch up to men in terms of mean number of publications and citations in the younger groups. Perhaps the factors holding women back professionally were starting to improve at that time. 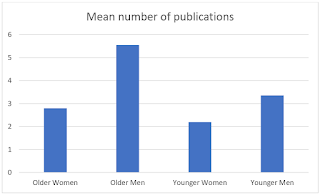 Publication rates by age and gender.
(Adapted from Table 1 of Primack & Stacey, 1997)

The article: Primack, Richard B., and Elizabeth A. Stacey. 1997. “Women ecologists catching up in scientific productivity, but only when they join the race.” BioScience 47(3): 169-174.