Posted by Richard B. Primack and Amanda Gallinat

“October is the month of painted leaves. Their rich glow now flashes round the world.”
–Henry David Thoreau 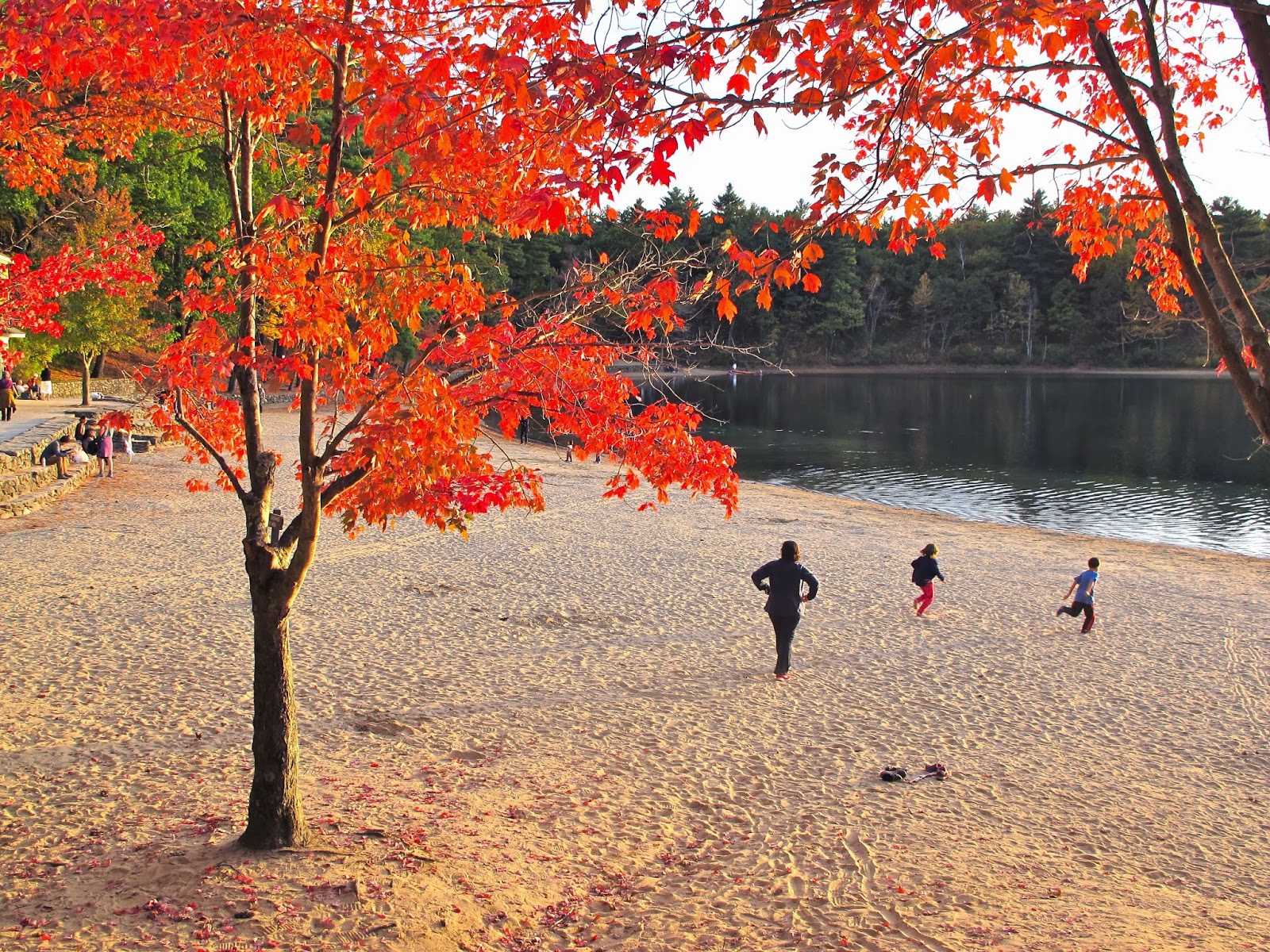 Walden Pond in Concord MA, autumn 2013 (photo by Richard Primack)
Our research over the past 12 years has emphasized the effects of a warming climate on spring phenomena. As spring temperatures rise, flowering dates, leaf out times of trees, arrivals of migratory birds, and first flight times of butterflies all happen earlier. However, in order to understand the effects of climate change on temperate breeding and growing season length, we must also understand how climate affects autumn phenology. Autumn events like leaf senescence, bird departures, and insect diapause have been neglected in climate change research due to their perceived complexity, as species respond to a combination of variables including temperature, soil moisture, shortening day length, and even spring phenology. In coming years we plan to devote more time to investigating the effects of climate change on autumn phenology.
Trees are already responding to a warming autumn climate, delaying when they change color and drop their leaves. Our work on ginkgo, cherry and mulberry trees in Japan demonstrates that their delay in autumn leaf senescence over the past 60 years is greater in number of days than their shift toward earlier flowering and leaf out times. We are continuing this work in the Boston area through our investigations of the timing of leaf color change and drop using more than 1000 tree and shrub species at the Arnold Arboretum. 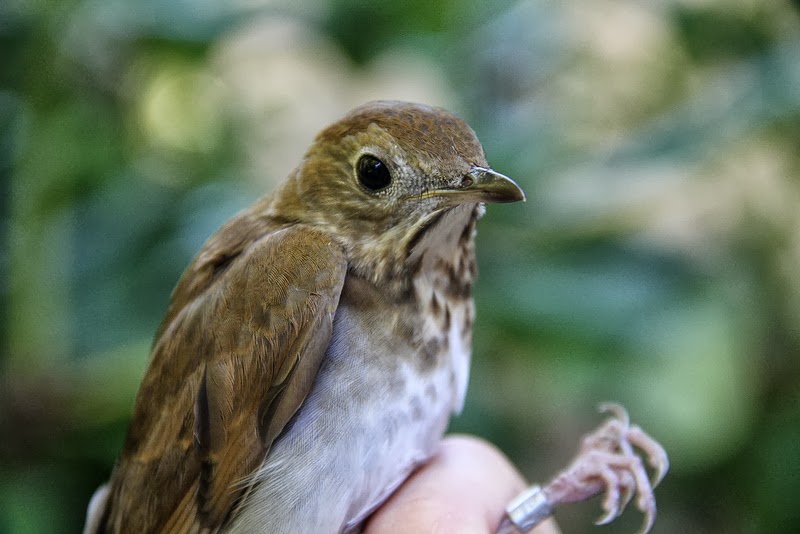 We are also pursuing the question of how milder autumn weather affects the timing of autumn migration, when birds depart New England and fly south to their wintering grounds. Some bird species in North America and Europe are advancing their arrival dates, shifting their breeding season forward, and departing earlier in autumn. In contrast, other species are taking advantage of arriving earlier in spring by producing more broods, expanding the breeding season and departing later in autumn. We are currently investigating if this pattern holds up for New England. Stay tuned!

Posted by Amanda at 2:28 PM No comments:

Common Gardens in the Maine Woods

“On the 31st of August, 1846, I left Concord in Massachusetts for Bangor and the backwoods of Maine, by way of the railroad and steamboat…”
—Henry David Thoreau, The Maine Woods

On the 16th of September, 2013, I left Cambridge in Massachusetts for Bar Harbor and Acadia National Park of Maine, by way of I-95 and my Prius.  My trip north was a straight shot compared to Thoreau’s arduous journey in the 19th century, but the Maine woods remain a scenic destination for leaf-peepers, nature lovers, adventure-seekers, ecologists, and botanists.

Over three field seasons at Acadia National Park I have sifted through archives for historical data on the abundance of plants; I have digitized a small herbarium to capture past dates of flowering; and I have hiked transects across the ridges of Mount Desert Island recording leaf out and flowering at various elevations.  This trip marked the beginning of a new project.  I spent two weeks in Maine setting up a common garden experiment, constructing raised beds and filling them with native transplants.  With this experiment, our research shifts from describing changes in plant phenology to testing the mechanisms that underlie their responses.

Common garden experiments are a classic method for determining reaction norms in plants. Transplants from different provenances are grown together in a common garden to isolate the effects of genetic adaptations under uniform conditions. Clausen, Keck, and Hiesey’s (1940) iconic reciprocal transplants featured cloned Potentilla glandulosa ecotypes in gardens established along an elevation gradient in the Sierras. The experiment revealed both phenotypic plasticity within ecotypes and genetic differences between them.


In Acadia, we have a compressed elevation gradient, from sea level to the 1532’ summit of Cadillac Mountain.  Many common plant species — including low bush blueberry (Vaccinium angustifolium), sheep’s laurel (Kalmia angustifolia), and three-toothed cinquefoil (Sibbaldiopsis tridentata) — grow along this entire gradient.  Work in Thoreau’s Concord has revealed that the spring phenology of these species is correlated with temperature. This experiment will test for local adaptations for responsiveness in flowering and leaf out phenology among populations from different elevations.  Will blueberries from the cold, windy summit leaf out and flower readily in the mild conditions below treeline?  Or will they lag behind the plants from lower elevations when all of them are transplanted into the same garden?

Setting up this experiment was a huge undertaking. I worked with Friends of Acadia, a nonprofit organization that sponsors volunteer mornings in the park, to construct 6’ x 12’ raised beds at the base of Cadillac, halfway up the mountain, and just below the summit.  We filled the beds with 70 cubic feet of topsoil to control for differences in soil depth and nutrients between sites.  Moving 70 cubic feet of soil from the road to a raised bed tucked 150 meters into the woods via a bucket brigade over rocky trail-less terrain is quite a feat.  We did it three times!  My volunteers were amazing, upbeat, and dedicated workers.  We had great fun (and great weather!) clearing the sites, hauling lumber, constructing the beds, moving soil, digging up, transplanting, labeling, and watering plants over a two week period.  As I patted soil around my last three-toothed cinquefoil transplant on Friday afternoon, I couldn’t believe that just fourteen days earlier the site had been a patch of blueberries and sheep’s laurel, interspersed with glacial till and only a wisp of blue flagging around the lower branch of an oak tree to foretell it’s future transformation.  What an impressive makeover!  I’m looking forward to returning to the gardens in the Spring for our first season of data collection!