While the spring weather in New England has been unremarkably "normal", Japan has experienced a record warm spring. March was the warmest on record for 35 of the 140 weather observatories around Japan that have been recording weather since 1953. Regular readers of this blog will not be surprised then that the cherry blossom season was record early. I know of no culture as fascinated by signs of spring as the Japanese, and the flowering of cherry trees is a greatly anticipated national event. 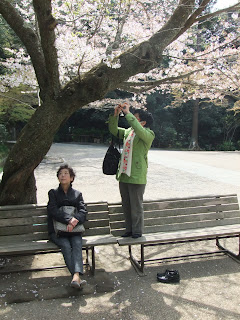 Hanami, or cherry blossom viewing, is a popular Japanese pastime and has been for many hundreds of years. Each spring authorities attempt to predict the date of peak cherry flowering so that people can plan parties under the ephemeral blossoms. This spring, cherry flowering was 10 days earlier than predicted in Tokyo and was 15 days earlier than last year. Summer-like temperatures in March, including an astonishing 25.3˚C on 10 March, are to blame for the early flowers that are tied with 2002 for the earliest on record.

Of course this early spring did not stop large crowds of people from enjoying the flowers. Throughout Tokyo, parks and temple grounds were overflowing with groups of families, friends and co-workers eating and drinking under the dense canopy of beautiful blooms. 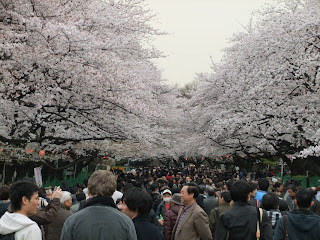 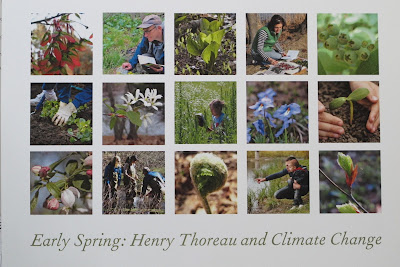 Over the past few years Primack Lab members have been collaborating with folks from the Concord Museum on an exhibit showcasing our work in Concord over the past 10 years, as well as historical artifacts focused on the long history of natural observation in Concord.  After years of planning, brainstorming, and meetings, followed by several months of intense preparation, we are pleased to announce that the exhibit is now officially open!

On April 11 the museum hosted a fabulous party to celebrate the opening of the exhibition. The party was well attended, and many of the notable contributors to the exhibit were there. The exhibit will be open until September 15th, so if you are in the area make sure to stop by and check it out!

There have been a number of articles about the exhibit in the press, with more expected in the next few weeks.  Below is a link to a Boston Globe area that came out a few weeks ago. 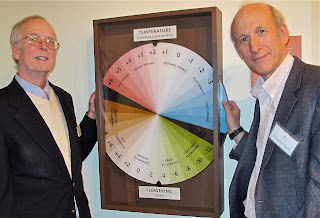 The Quackenbush Journals from Oxbow, Maine


Not many people travel to northern Maine for Spring break, but we made the trek to Presque Isle at the end of March.  We flew into the tiny airport in a little prop plane — we were in search of the old Quackenbush home in Oxbow.

Leonard  Quackenbush, a hunting guide, lived in Oxbow in Aroostook County, Maine in the mid-twentieth century, about 40 miles south of Presque Isle. His journals from the 1940s and 1950s include detailed observations of the time of leaf out, flowering, and bird arrivals.  He even indexed his natural history records towards the end of his life, compiling long lists of observations by species and year.

The Quackenbush journals and hand-written indices found their way to the archives at College of the Atlantic in Bar Harbor, Maine. Several months ago we began to dig through these records and analyze the relationship between the timing of these events —leaf out, flowering, and bird arrivals — and local temperatures each year. We also wanted to determine if the timing of these events had advanced since Quackenbush had made his observations due to a warming climate. This work is important as northern Maine has been relatively neglected in climate change research.

To gain a better understanding of Quackenbush and his field site in Oxbow, we recently visited the University of Maine at Presque Isle, where we were hosted by  Professor Jason Johnston, a wildlife ecologist, and Professor Bob Pinette, a botanist. Upon our arrival, we discovered that we had already made the local papers!  We presented a seminar at UMPI — advertised in the Presque Isle Strar Tribune — on our previous research and our hopes for the data in Quackenbush’s journals.  After the seminar, Jason brought us to Oxbow, a small community where there are many hunting lodges, where we found Quackenbush’s old house and the red oak trees in his yard.  A quick tour of the woods behind his house and along the road reaffirmed our belief that Quackenbush mostly likely made his observations when walking from his house to the nearby village post office.

Later in our visit, Jason and Bob agreed to work with us to find recent records of plant flowering times, tree leafing out times, and bird arrival times to compare with the Quackenbush observations. They also decided to start making these observations themselves in the Presque Isle area. Local birder Bill Sheehan offered to let us analyze his observations of arrival times made over the past several decades.

After being forgotten for half a century, the Quackenbush journals are stimulating a flurry of research on climate change in northern Maine. 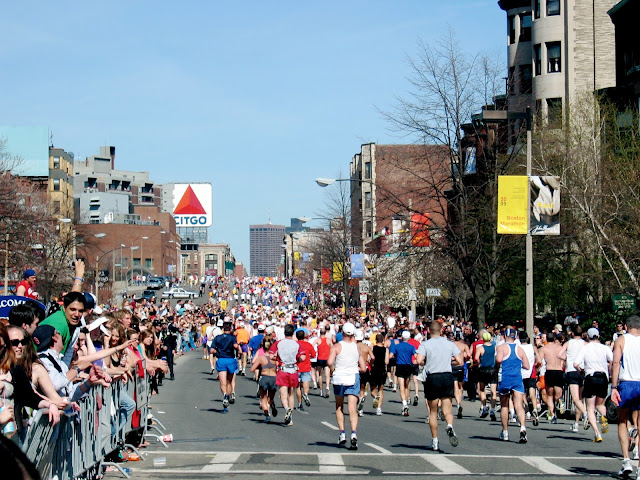 Runners in the Boston Marathon on Beacon Street coming into Kenmore Square. (Photo by Noah Reid).

Winning times for the Boston Marathon have grown steadily faster over the past 80 years, with
better training methods and an increasing number of international runners. Winning times may
nonetheless slow in the future as the climate of Boston continues to warm—running times
are already affected by weather on the day of the race. For example, the winning men’s time
during last year’s hot weather was nine minutes slower than it had been in the cool-weather race
of 2011. Our analysis shows that winning times are almost 2 minutes slower for every 10⁰ F
increase in temperature. The main reason that heat so often beats runners is its adverse effects
on the human body’s ability to regulate internal temperature, leading to heat exhaustion, cramps,
dehydration, and other injuries.

Even though Boston’s average annual temperatures have steadily warmed by about 5⁰ F over
the past 80 years, the average temperature on race day has not changed so far because of the
great variation in the weather from day to day in Boston. The temperature for the 2012 race, for
example, fell only one degree short of the all-time high at 89⁰, while in 2011 it was a chilly 57⁰.
As a result, global warming has not yet affected winning times of the Boston Marathon. But what
about the future?

Based on our research, if Boston temperatures continue to warm by 4.5⁰ F by the end of the
century as predicted using a mid-range model, there will be 64% chance that winning times
will be slower. If the shift is as high 9.4⁰ F, which is an upper estimate of global warming, the
probability of slower race times is bumped up to 95%.

Warming temperatures have implications not only for the Boston Marathon, but for the future of
all warm-weather outdoor activities, including construction and farm work, team and endurance
sports, and physical fitness training. 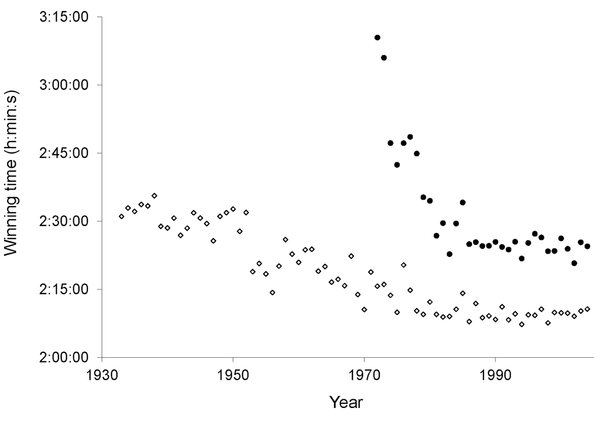 
More details can be found in “Effects of Warming Temperatures on Winning Times in the Boston Marathon,” published in 2012 in the open-access journal PLOS ONE:

Posted by Amanda at 1:09 PM No comments: