“My only integral experience is in my vision”
—Henry David Thoreau

We recently received a new National Science Foundation grant through the OPUS program entitled, “The impacts of changing phenology on species, ecological interactions, and conservation.” OPUS is an acronym for Opportunities for Promoting Understanding through Synthesis.

This project will allow my former students and I to write a series of review articles on topics related to our research activities on climate change, phenology, sampling biases with historical data, ecological mismatches, botanical gardens and conservation. 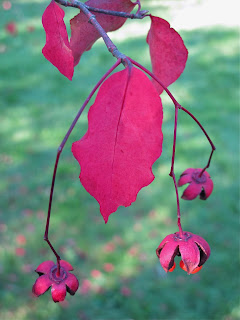 
The project will also assist us to make our research datasets publicly available, along with the metadata needed to use this data in other research projects. For example, for the past 17 years we have been gathering data on the flowering times, leafing out times, and bird arrival times in Concord, MA, building on the observations of Henry David Thoreau.  We have also been accumulating data on how the abundance of plants species has been changing over time Concord. This data will soon be available on-line. 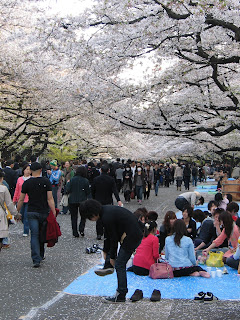 
Datasets from elsewhere in the USA and other countries where we have worked, including China, South Korea, Japan, and Germany, will similarly be available on-line. This includes the network of eight botanical gardens that monitored the phenology of over 1600 species of woody plants.

Wildflowers have a fear of trees! A new project begins.

by Richard B. Primack

We have received a new NSF-funded project to determine if trees in the eastern United States, like oaks and maples, respond more rapidly to a warming climate than spring woodland wildflowers, like trout lilies and anemones. If so, the wildflowers might be getting shaded out in spring, reducing their ability to mature their fruits in summer and to grow and flower in later years. This is an example of an ecological mismatch between different species, in this case trees and wildflowers, and could lead to the decline of woodland wildflowers. 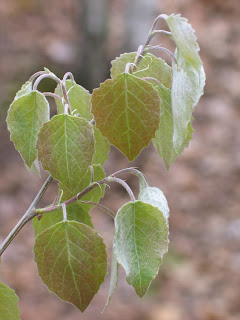 Trees such as this big-toothed aspen are leafing out earlier in the spring.

This work builds on the observations of famous environmental philosopher Henry David Thoreau from the 1850s in Concord, MA, combined with our own observations from 2004 to the present, which show that trees leaf out earlier now than in the past and wildflowers are flowering earlier. 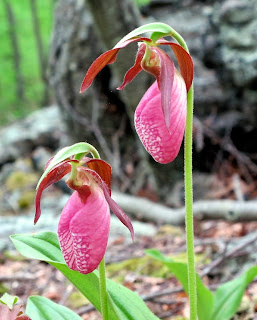 Wildflowers, such as this pink lady’s slipper orchid, might be shaded out by trees in coming years.

We are using herbarium specimens, which are plant museum specimens, to extend our study across the entire eastern United States. Much of this work is being carried out by BU grad student Tara Miller with help from others.

Colleagues in China and Germany will carry out comparable studies, allowing us to determine if this mismatch between trees and wildflowers is really a global phenomenon. 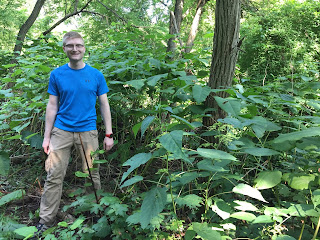 Mason Heberling at one of the Pittsburgh field sites.

Our co-PIs on this grant, Mason Heberling at the Carnegie Museum and Sara Kuebbing at the University of Pittsburgh, will carry out complementary experiments to determine the combinations of temperature and photoperiod that trees and wildflowers use to start their spring activity.  They will also measure photosynthetic rates of wildflowers to determine how they respond to reduced light levels.

This work was recently covered by the Daily Free Press.

Posted by Tara Miller at 8:42 AM No comments:

Old stone walls have a story to tell

“The past is the canvas on which our idea is painted.”
-Henry David Thoreau

Old stone walls running through Newton’s parks and conservation areas provide insights into the city’s agricultural past. In the 1700s and 1800s, much of the city’s land was used for growing crops and fruit trees, and raising domestic animals.

According to Robert Thorson, author of “Stone by Stone,” “The original property boundaries were likely wooden fences, with stones placed along the fences as farmers worked their fields.” Only in the early 19th century, when wood became scarce, did farmers build stone boundary walls.

Along a stone wall in Kennard Park on Dudley Road sits a four-sided enclosure 100 feet on a side, with a 40-foot gap. Was this a corral for sheep, with a gate in the gap? 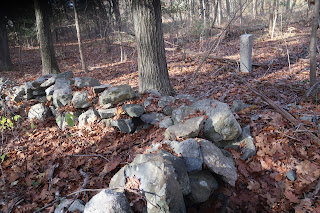 A stacked stone wall takes a right angle turn in the Kennard Park.

Newton’s stone walls were hand-built with materials found nearby, sometimes using oxen. While most walls are built with stacked stones, in the Webster and Hammond Woods, large stones, some weighing over 1,000 pounds, are arranged in lines. 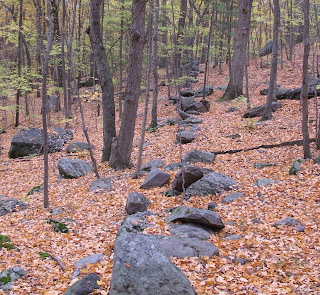 Massive stones form a wall, one at a time, in Webster Woods.

It is worthwhile to observe and appreciate these stone walls and contemplate their mysteries.

This post is based on a recent article in the Newton Tab.

I was fortunate to be able to spend my winter holiday this year traveling in Taiwan and New Zealand. I started off exploring Taichung City, where my parents currently live. Almost everywhere you go in Taichung is crowded and busy; however, after driving for several hours on (anxiety-inducing) mountain roads, my mother and I were able to find some isolated trails. We were rewarded with excellent bird-watching, and saw several endemic species such as the Taiwan Barbet and the Taiwan Sibia. 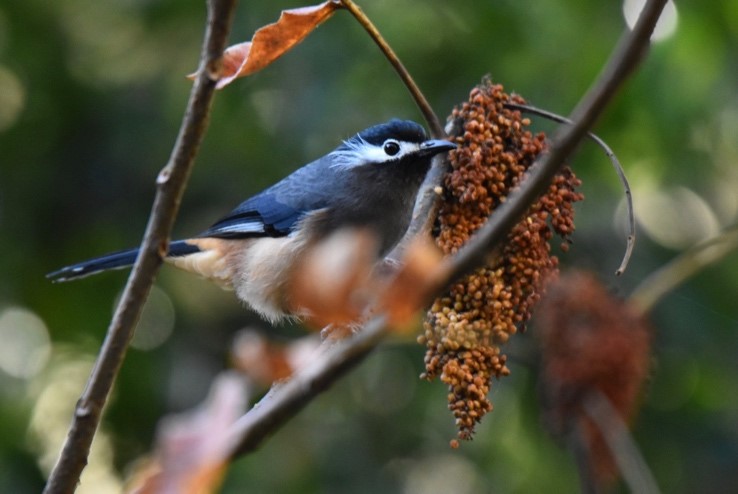 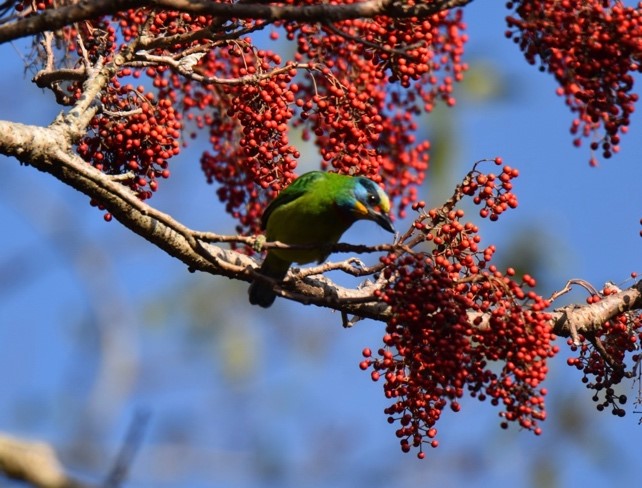 New Zealand was much different – colder and drier (despite the fact that it is summer there) and far less busy. A large proportion of the people we met were travelers themselves; everyone was involved in hiking, kayaking, biking, or some sort of outdoor activity. The mountains were much more rugged and rocky than the jungle-filled mountains in Taiwan. 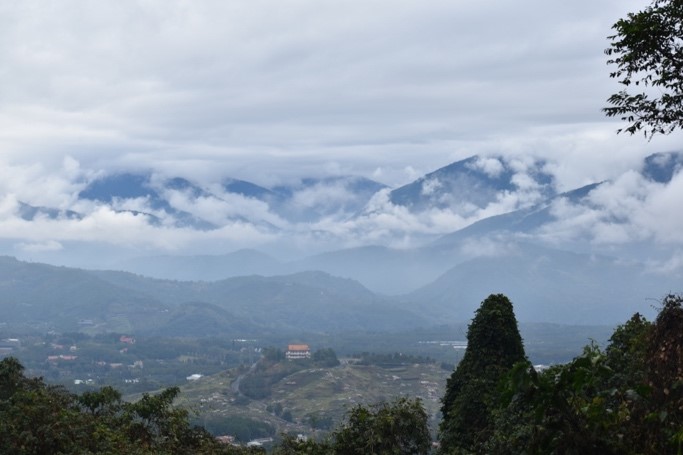 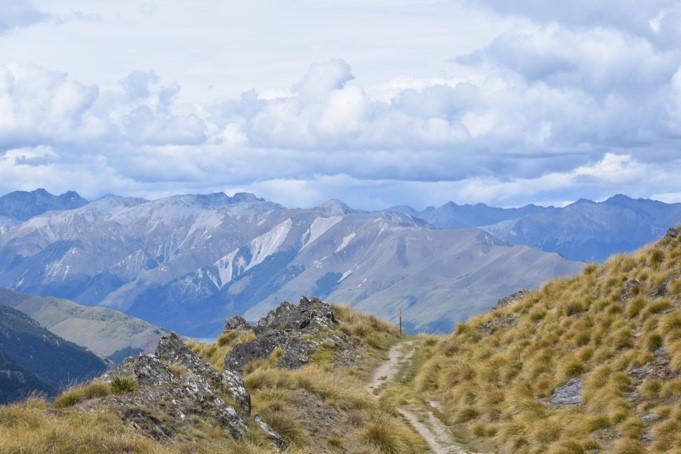 However, the bird life in New Zealand was similarly interesting and diverse, with its own share of endemic species such as the Fantail. New Zealand is working hard to conserve these species, with strict customs to prevent invasive species and initiatives to bring back their endangered birds, like the kiwi and the kakapo. 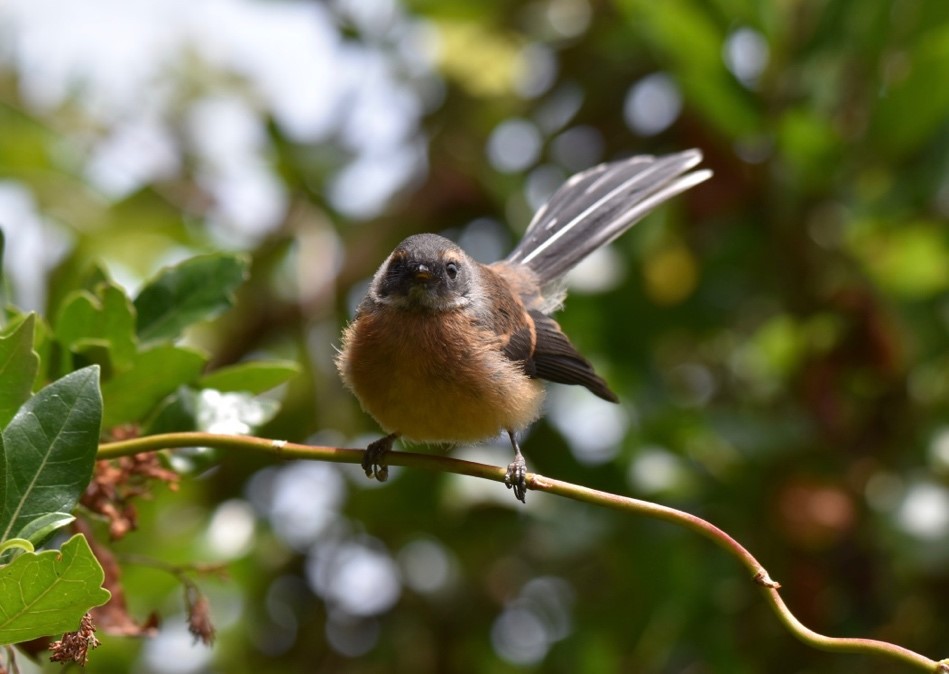 Overall, both of these islands were beautiful places filled with diversity. I would love to go back eventually and see more of the nature they have to share.

In the 1940s and 1950s, L.S. Quackenbush, a northern Maine hunting guide,  recorded dates of leaf out, first flower, and migratory bird arrivals around his home in Oxbow, not far from Presque Isle. In a recent article published in Northeastern Naturalist, titled Advancing Leaf-out and Flowering Phenology is not Matched by Migratory Bird Arrivals Recorded in Hunting Guide’s Journal in Aroostook County, Maine, we compared Quackenbush’s observation with modern observations and weather records.

Our results show that leaf out and flowering are correlated with spring temperatures, but migratory bird arrivals are not, pointing to potential phenological mismatches in coming years.  The results also suggest that the trees and wildflowers are not responding as rapidly to climate change as the plants in Concord, MA that were observed by Henry David Thoreau in the 1850s.

Last week Quackenbush and our research article were highlighted in the Washington Post: How a mid-20th-century hunting guide may fill the gaps on climate change in Maine! We're so excited to see this research on a national stage!
Posted by cmac at 12:46 PM No comments:

Earlier this month I had the pleasure of meeting with the Girl Scouts of Allston/Brighton, MA to discuss local scale impacts of climate change. The troop was particularly interested in Massachusetts’s birds and how they can be impacted by climate in ways that aren't always easy to see. 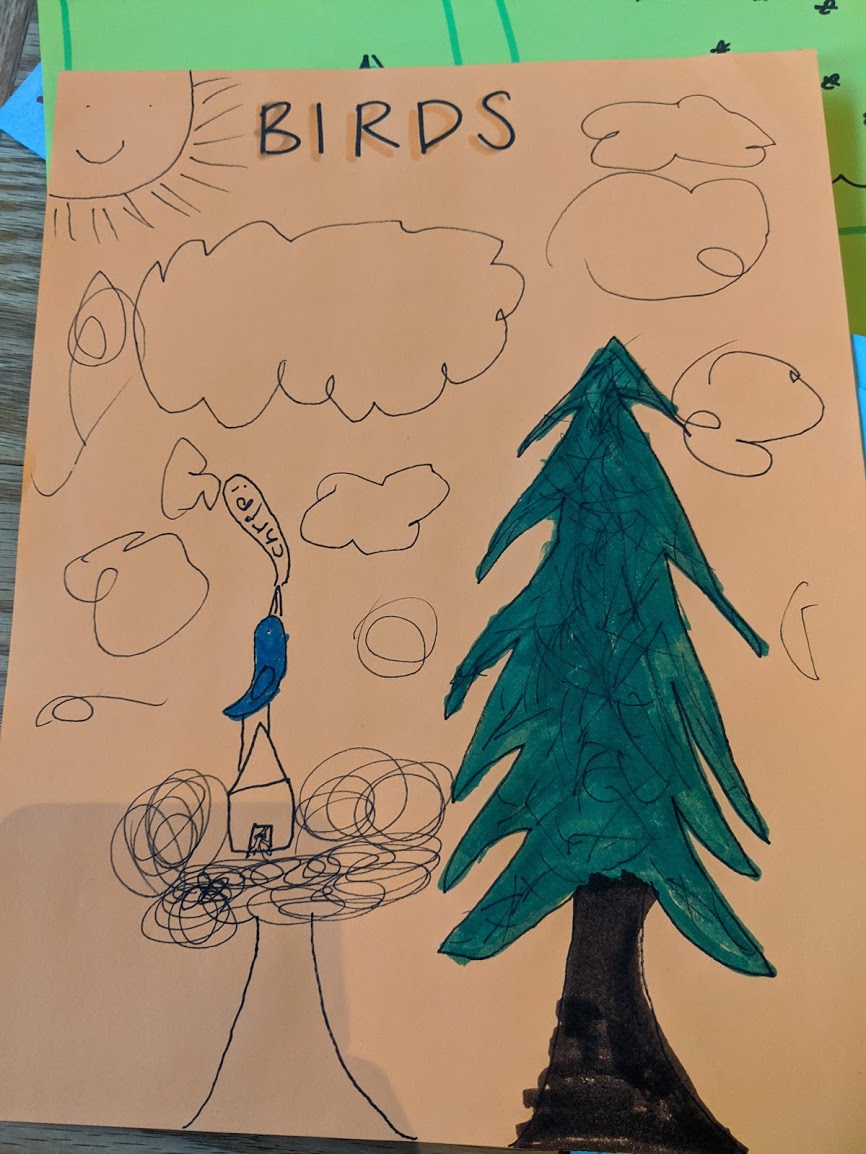 One of the amazing drawings of MA birds

Together, we drew the life cycle and habitat preferences of birds that migrate to Massachusetts and thought about how climate and people can impact each stage. 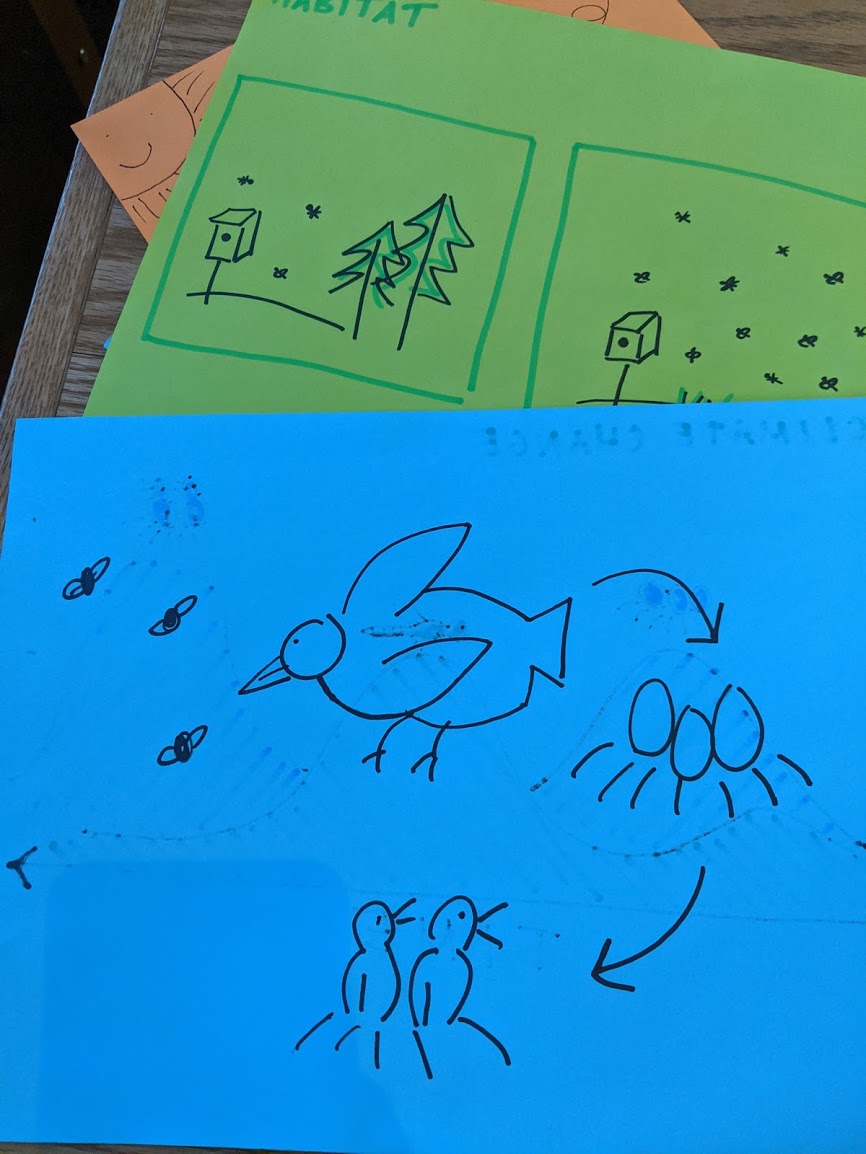 Another drawing of bird habitats at the top, and bird reproductive stages below

We focused on the potential for climate to shift food availability for birds that eat fruits and insects, and the consequences of these ecological mismatches for birds and other species. 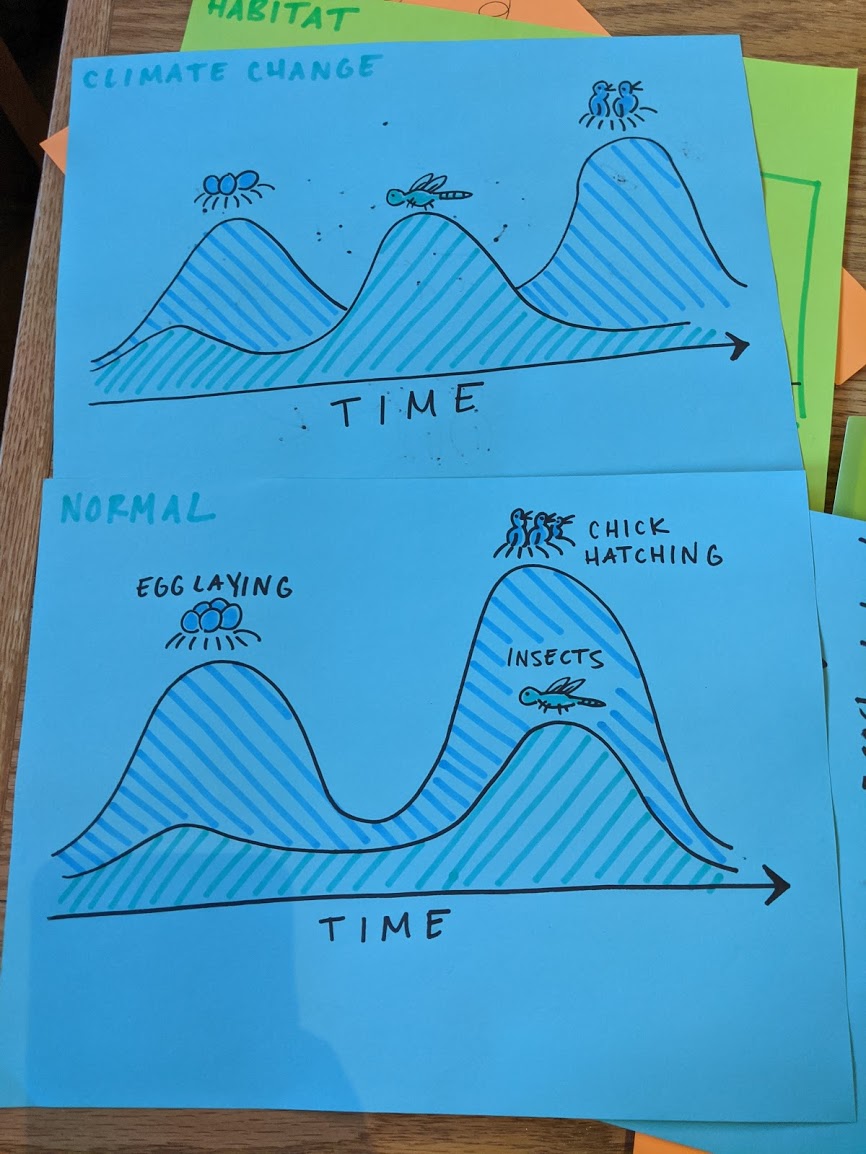 But most importantly we talked about how cool birds are and how we can help support local bird populations going forward. I had a great time meeting with the troop and answering their insightful questions about climate change impacts! The cookies they gifted me were icing on the cake. 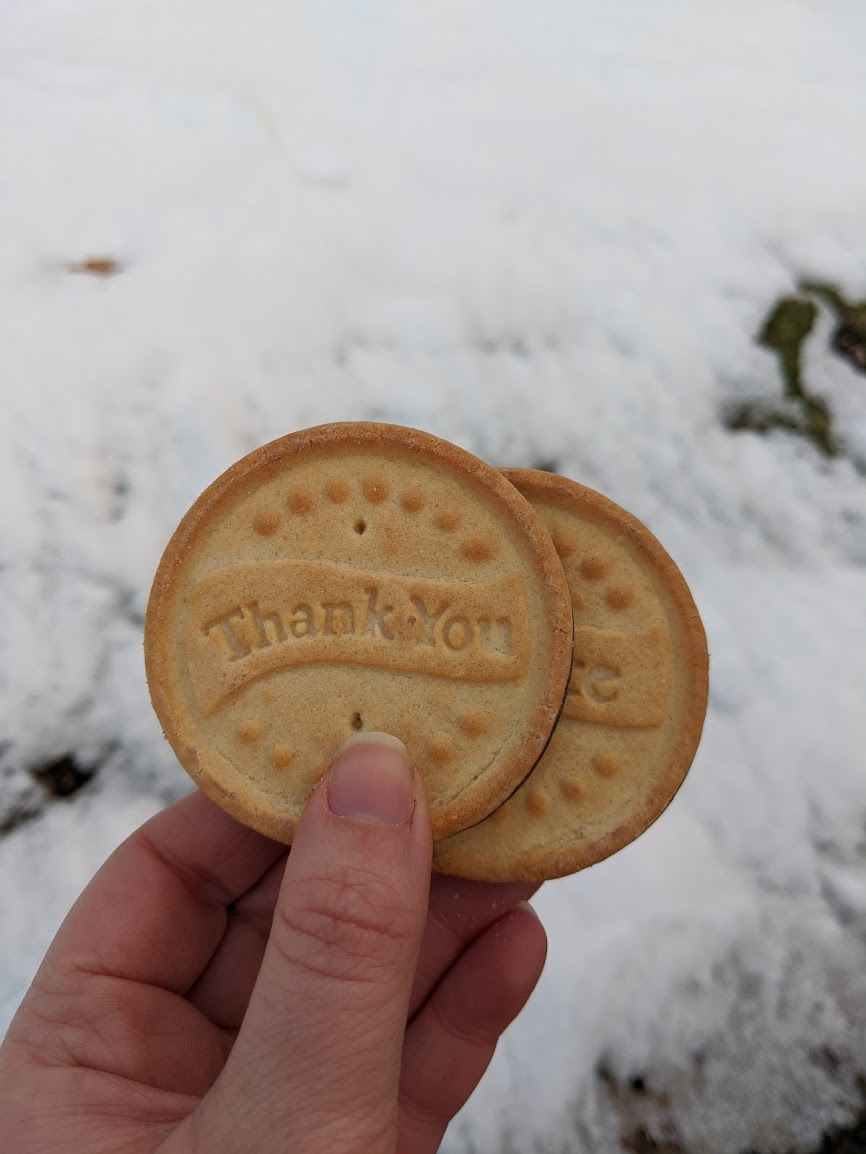 Thank you Girl Scouts of Allston/Brighton!


“If we would aim at perfection in any thing, simplicity must not be overlooked.”
Henry David Thoreau

As described in a recent article in the Newton Tab, the Newton City Council passed a Climate Action Plan, to make Newton carbon neutral by 2050. The City will increase use of electricity from renewable sources, decrease the use of fossil fuels such as oil and natural gas, and increase the energy efficiency and electrification of existing and new buildings and transportation systems. The City will encourage participation of businesses and residents.

The Newton Power Choice program currently supplies the city with 60% of its electricity from renewable energy sources such as hydro, wind, and solar power. Residents are also being encouraged to opt up to 100%. 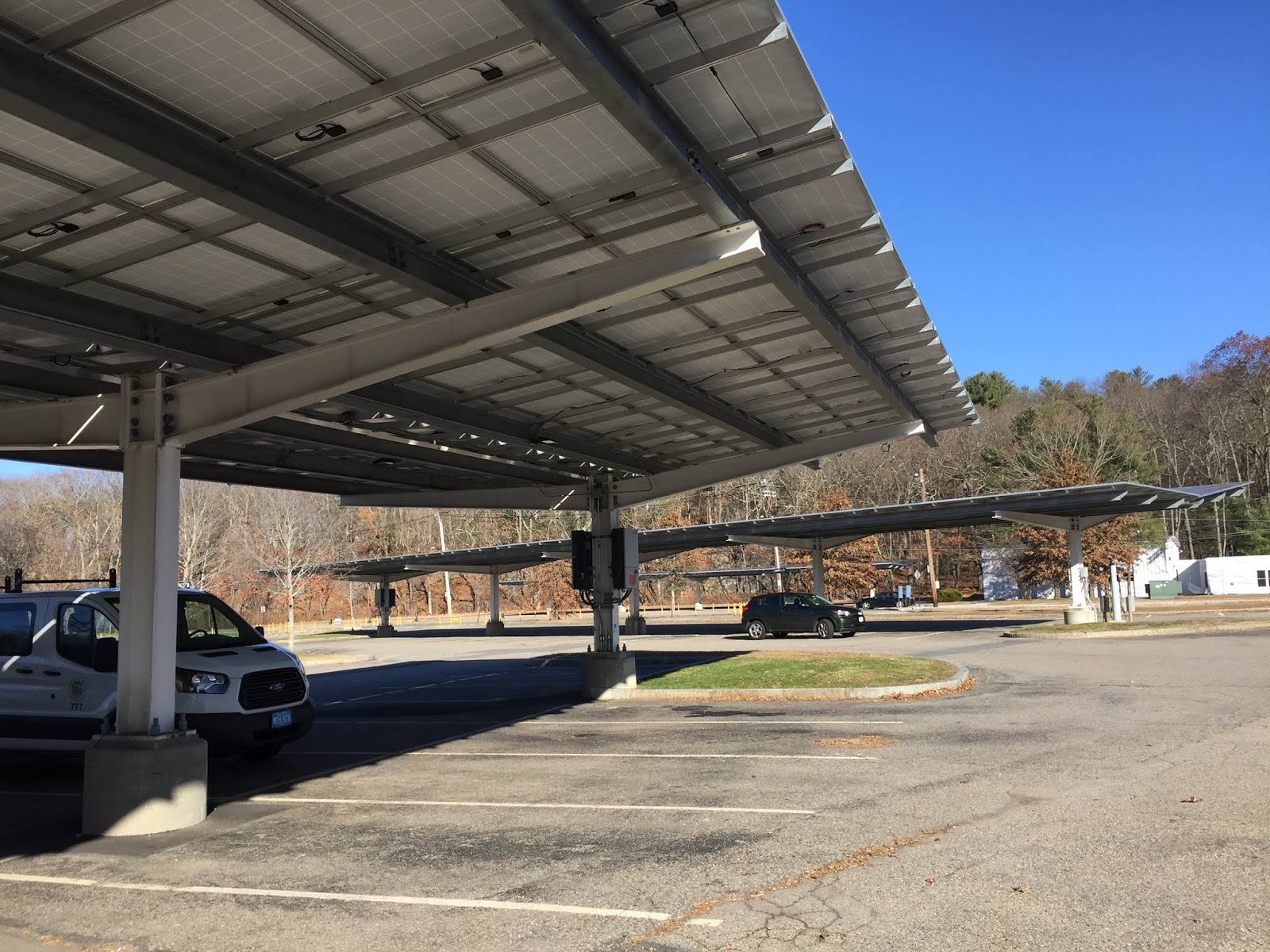 Installing solar panels is part of the plan, such as these solar  canopies in the Newton

The City plans to gradually replace gasoline-powered city sedans and other vehicles with electric vehicles and converting building heating systems to electricity, and encouraging residents and businesses to do the same.

To be successful, this really must extend beyond Newton and Massachusetts, to be a national and international effort. The people of Newton should also consider stronger actions needed to reduce overall personal energy usage.