The statistics of bird arrivals

"'But,' says one, 'you do not mean that the students should go to work with their hands instead of their heads?' I do not mean that exactly, but I mean something which he might think a good deal like that ...
How could youths better learn to live than by at once trying the experiment of living?
Methinks this would exercise their minds as much as mathematics."
-Henry David Thoreau, Walden 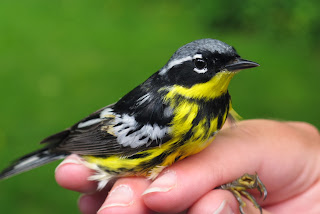 (Photo of a magnolia warbler by Richard Primack)

Last spring Richard Primack and I visited our friend and colleague Trevor Lloyd-Evans at Manomet Center for Conservation Sciences. For over 40 years researchers and volunteers have been banding birds at Manomet and have compiled an impressive dataset of migration dates at this beautiful coastal location. These unique records provide many details of the migration including first and mean arrival dates of particular species, population size, and morphological information such as mass and wing length. Members of the Primack lab have found these data incredibly useful for answering questions of how bird migrations have changed over time and in relation to warming temperatures (Miller-Rushing et al. 2008).

At Manomet we met up with the creative team of Chedd-Angier Production Company, a group working with the Annenberg Foundation to develop educational videos that explore statistical concepts through real-life examples. They thought our research on bird arrivals at Manomet would be a good fit for the "Normal Curves" segment. When the number of captured birds of a given species is graphed over the course of a migration season a "normal curve" is created and this is an important tool for understanding migration patterns and changes.

After a morning of banding, we spoke with them about how the analyses we do can answer questions about changes in bird migrations and populations, and how this is important for conservation efforts.

You can watch the full video here:
Against All Odds: Normal Curves 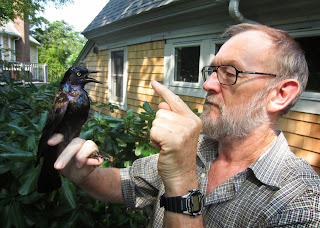 (Photo of Trevor and a common grackle by Patrick Roberts)

"As fruits and leaves and the day itself acquire a bright tint just before they fall, so the year near its setting. October is its sunset sky; November the later twilight." -Henry David Thoreau, Autumnal Tints 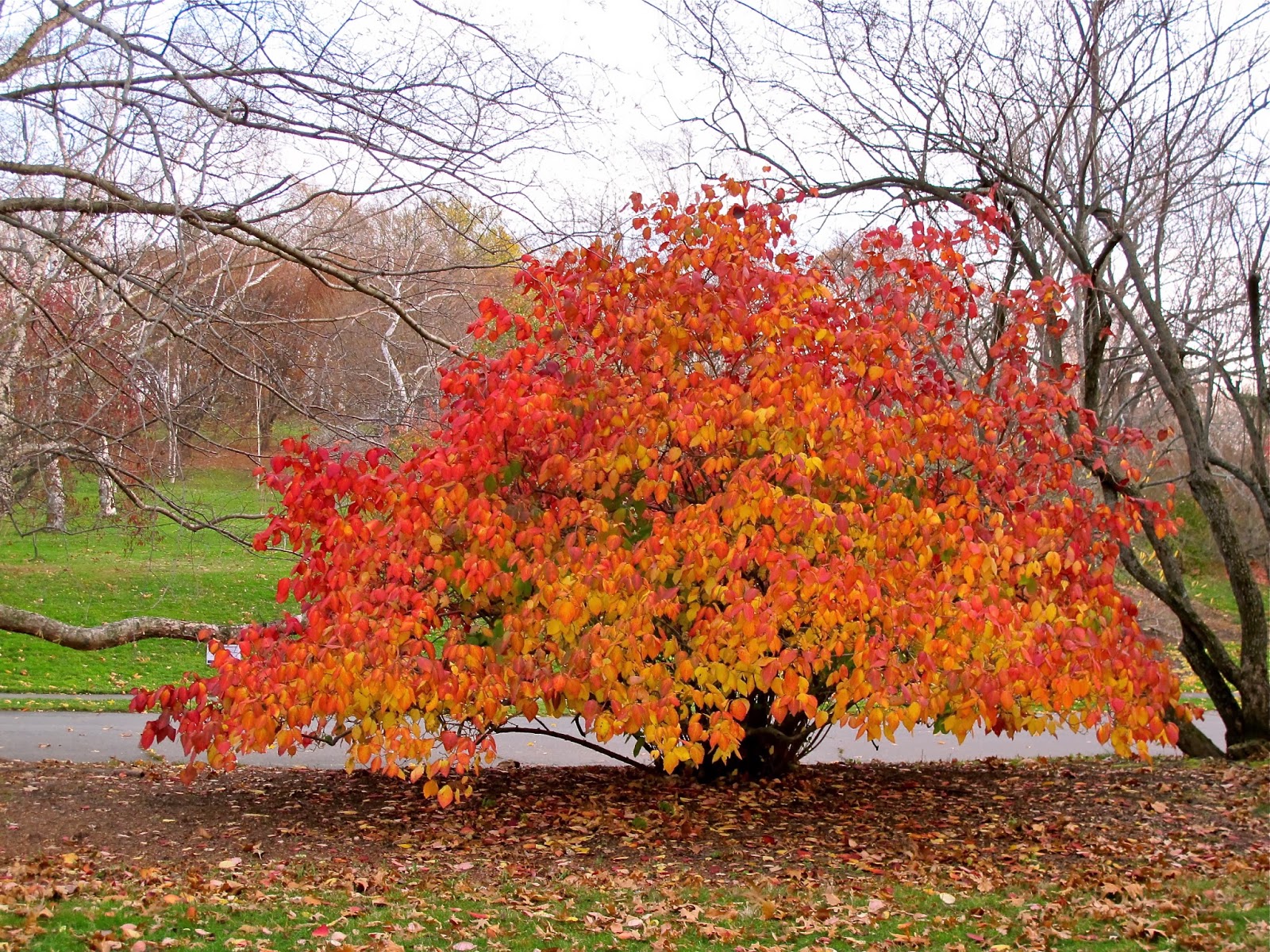 (This Viburnum carlesii at the Arnold Arboretum includes green, yellow and red leaves on the same individual)

On Saturday afternoon, I took a long, winding walk through Boston’s Arnold Arboretum with Richard Primack and BU undergraduates Christina Lupoli and Hilary Colbeth. It was a warm day, and I abandoned my coat at the car—it felt almost like the beginning of autumn, except that so many of the trees around us were bare. And that is precisely why we were there! For the past two years, the Primack Lab has been monitoring leaf color change and drop of about 1000 woody species spanning across the Arnold Arboretum. We want to know what specifically drives plants to senesce, and how climate change might alter this significant annual process. 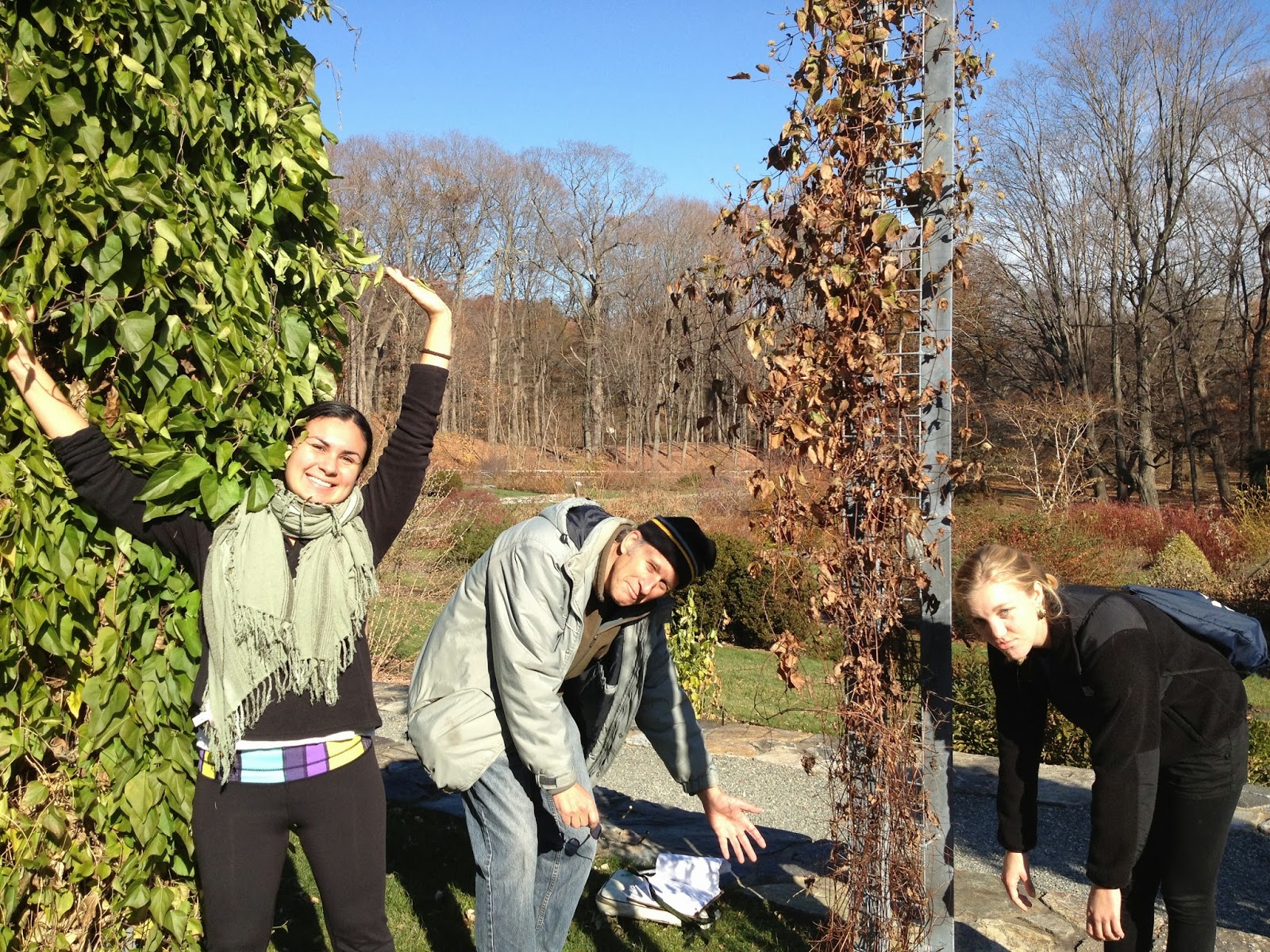 Plants unfold their first leaves in the spring quickly in response to warm temperatures. Spring leaf-out signals the start of the growing season, and triggers increases in carbon and nutrient uptake, evapotranspiration, microbial processes, and even insect activity!
Autumn leaf senescence, on the other hand, marks the end of the growing season in New England. The drivers of autumn senescence, and variation in senescence timing between plant taxa are largely unknown. One unique way to approach this gap in the knowledge is through the extensive collections at the Arnold Arboretum! By monitoring broadly across species throughout the season, in multiple years and in several arboreta around the world, the Primack Lab and our partners aim to determine how phylogeny and geography affect the timing of leaf senescence across species. We know that plants leaf out earlier now than they did in Thoreau’s time, but how leaf senescence has changed remains a mystery. 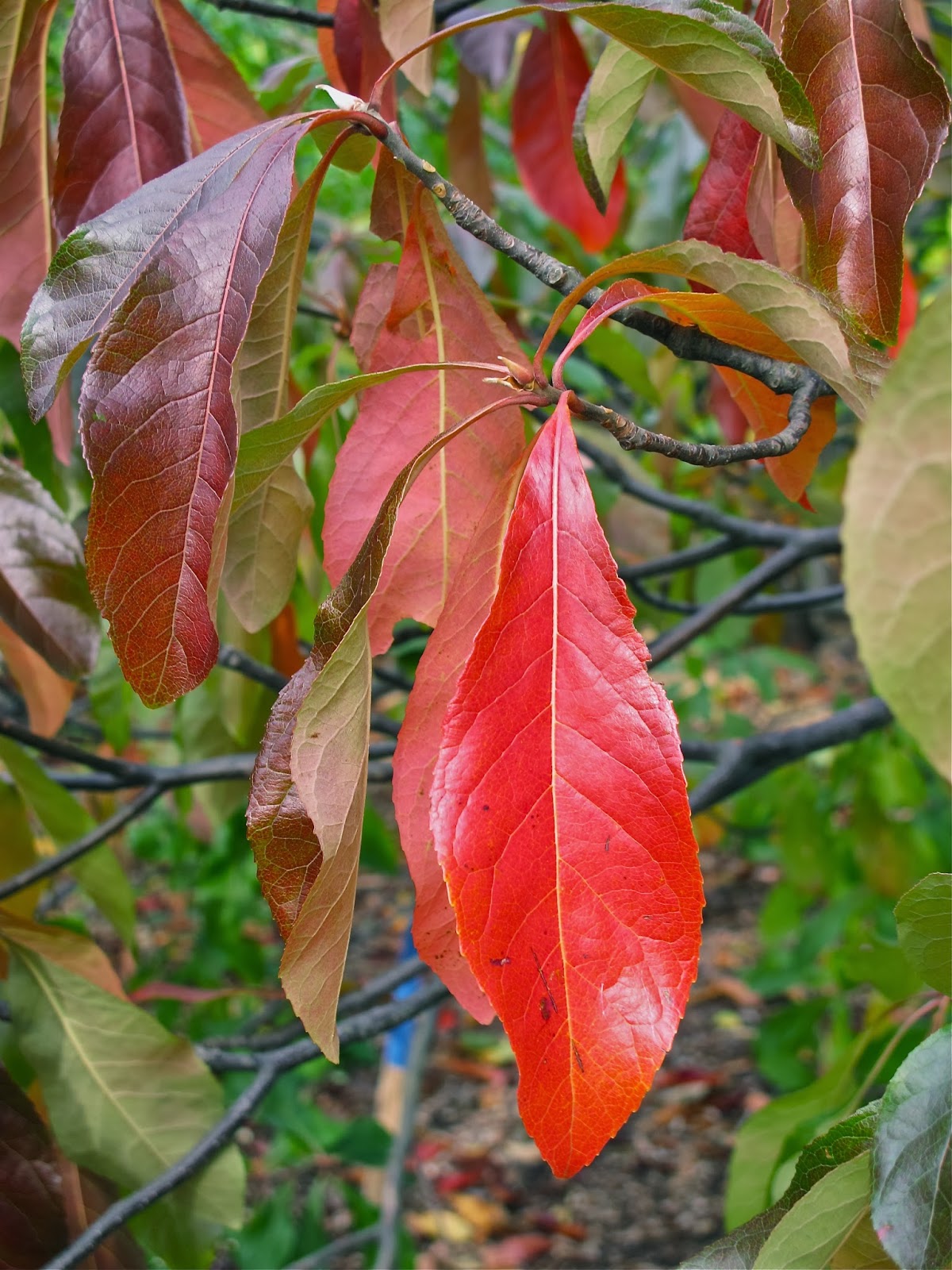 (This senescing Franklinia sp. turns from green to red)
Posted by Amanda at 5:06 PM No comments:

Thailand and Laos with a dash of Thoreau

Posted by Richard B Primack

“…for the most part it is as solitary where I live as on the prairies. It is as much Asia or Africa as New England. I have, as it were, my own sun and moon and stars, and a little world all to myself.” (Thoreau, Walden)

While Thoreau’s commitment to solitude was admirable, sometimes you have to leave your own little world and experience something new! Even Thoreau did embark from his beloved Concord for trips to other New England states, and occasionally even further afield.

Last month I visited Thailand and Laos for the first time. The two countries were a striking contrast; Thailand is a vibrant and rapidly developing country, while Laos is considerably less developed, without as much obvious economic activity. In both countries I met enthusiastic young wildlife ecologists who were eager to work with me to prepare conservation biology textbooks for their students. These books will be translations with local examples added in to increase their relevance. In both countries, some of the key topics being discussed are human-elephant conflicts, the impacts of new dams on fish populations, and ways to reduce poaching of endangered animals. 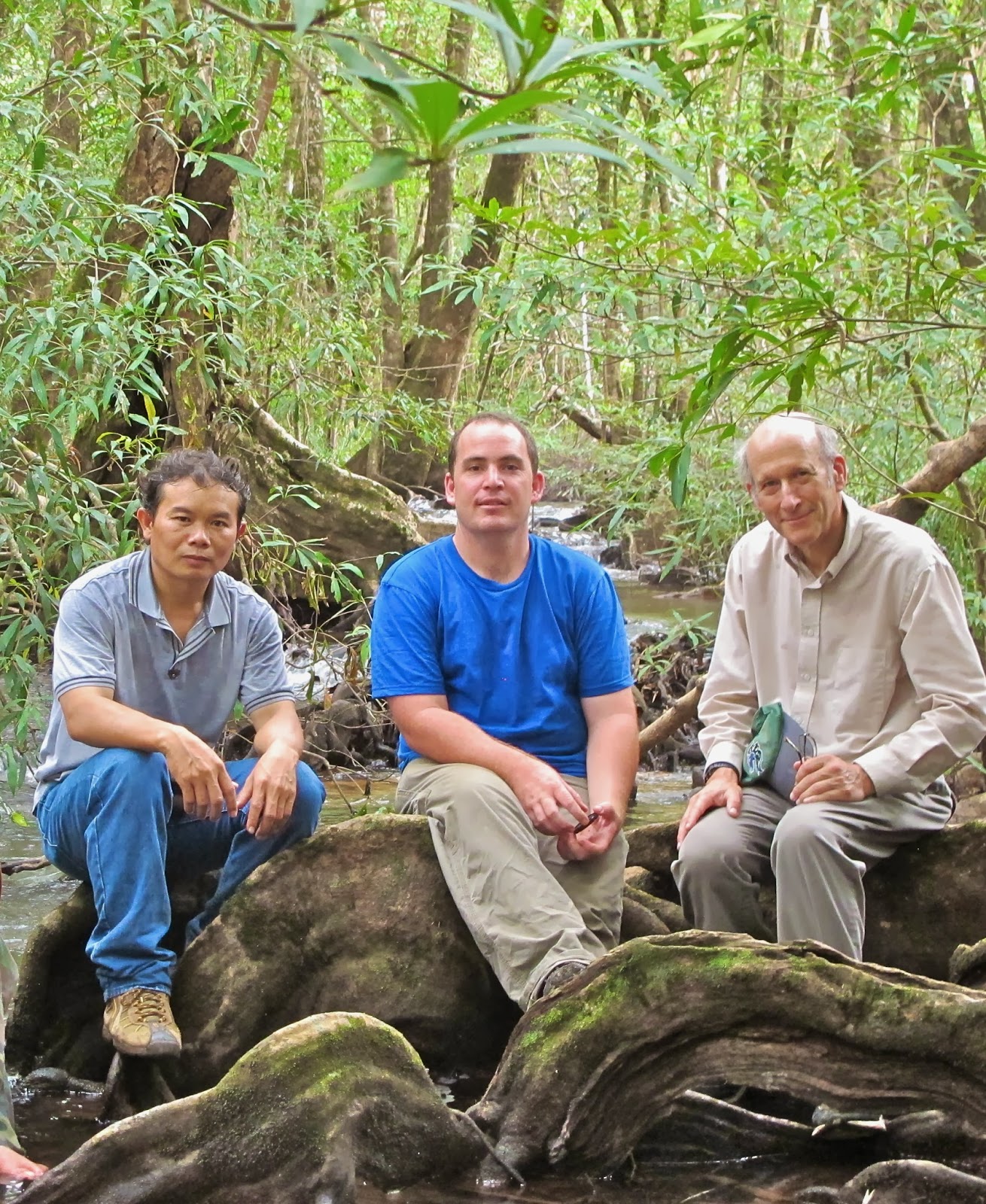 The highlight of my trip was a visit to Khao Yai National Park, an outstanding park two hours outside of Bangkok with a large visitor center, extensive accommodations, many trails, and food stalls. Most importantly, the park had abundant wildlife; during my visit I observed pheasants, two species of gibbons, sambar deer, barking deer, civets, four species of hornbills, and porcupines. One afternoon I saw more than a dozen hornbills feeding on fruit trees at the edge of a forest. And while I did not get to see forest elephants, their fresh dropping and trails were common. This was the most wildlife I had ever seen in a national park in the tropics, and demonstrated how numerous and visible animal life can be without any hunting pressure. The rich biodiversity at Khao Yai National Park is an example of conservation in action that will make our Thai textbook practical and relevant to students studying conservation biology. 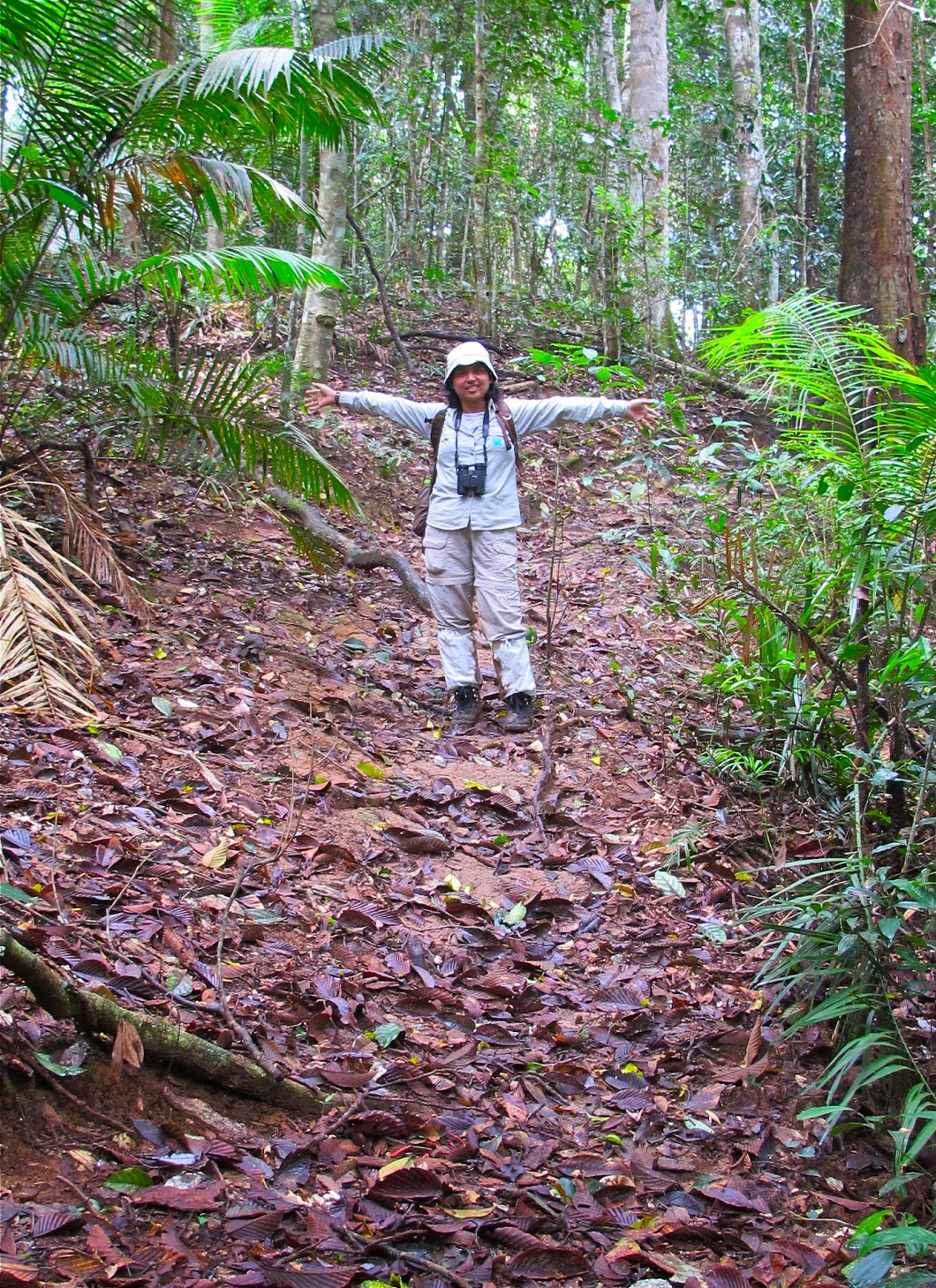 (An elephant trail in Khao Yai National Park in Thailand as illustrated by wildlife biology Chution Savini)
Posted by Amanda at 2:30 PM No comments: