Herbarium specimens offer a unique opportunity to measure changes in plant phenology over broad time periods and geographic ranges. Many of the specimens currently housed in herbaria were collected in the 19th and 20th centuries, but in just the last decade there has been a huge increase in herbarium-based phenology research-- particularly addressing modern questions about how plants are responding to climate change. 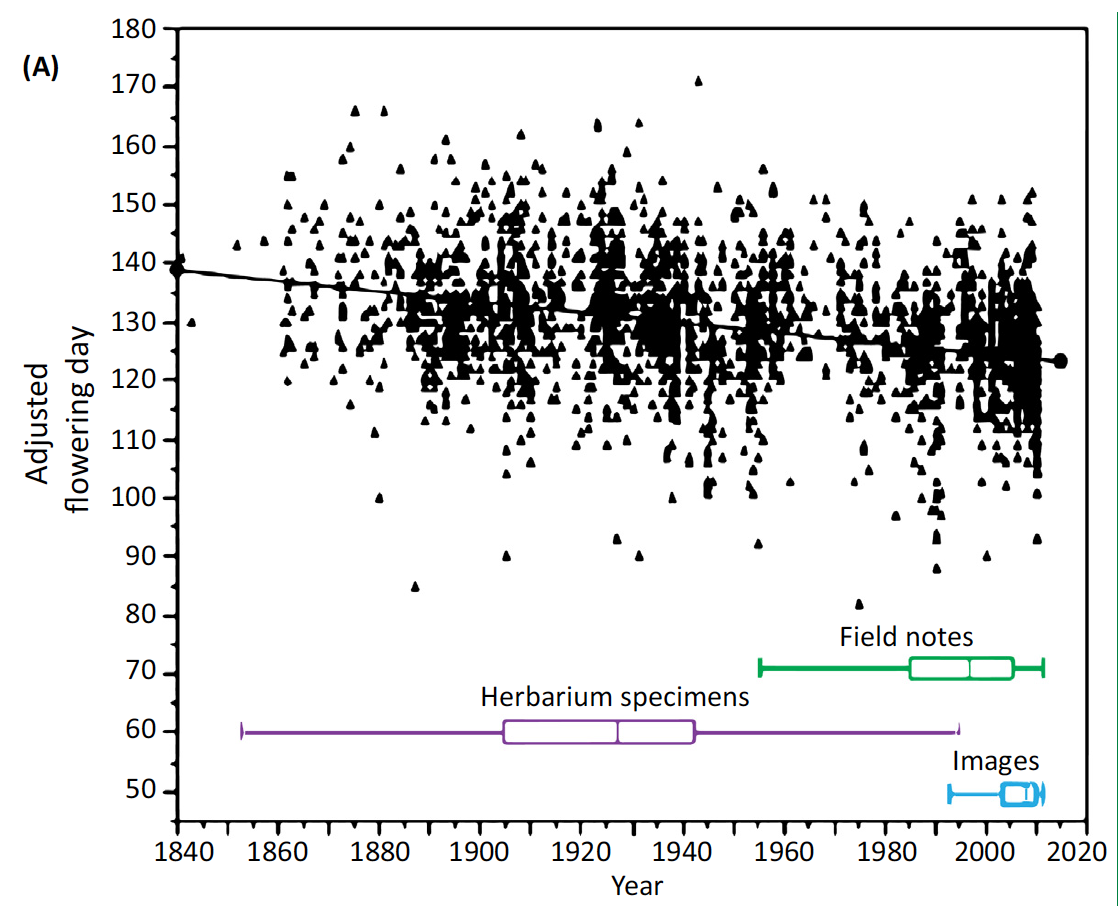 Panchen et al., 2012 used herbarium specimens, combined with field notes and photographs, to show that 28 plant species in Pennsylvania are advancing their flowering over time.

Earlier this year, Richard Primack and I were co-authors on a review paper led by Charlie Willis entitled "Old Plants, New Tricks: Phenological Research Using Herbarium Specimens." The review, published in Trends in Ecology & Evolution, provides a thorough assessment of how herbarium specimens have already been used in phenology research, with most studies focusing on flowering, in northern, temperate biomes. 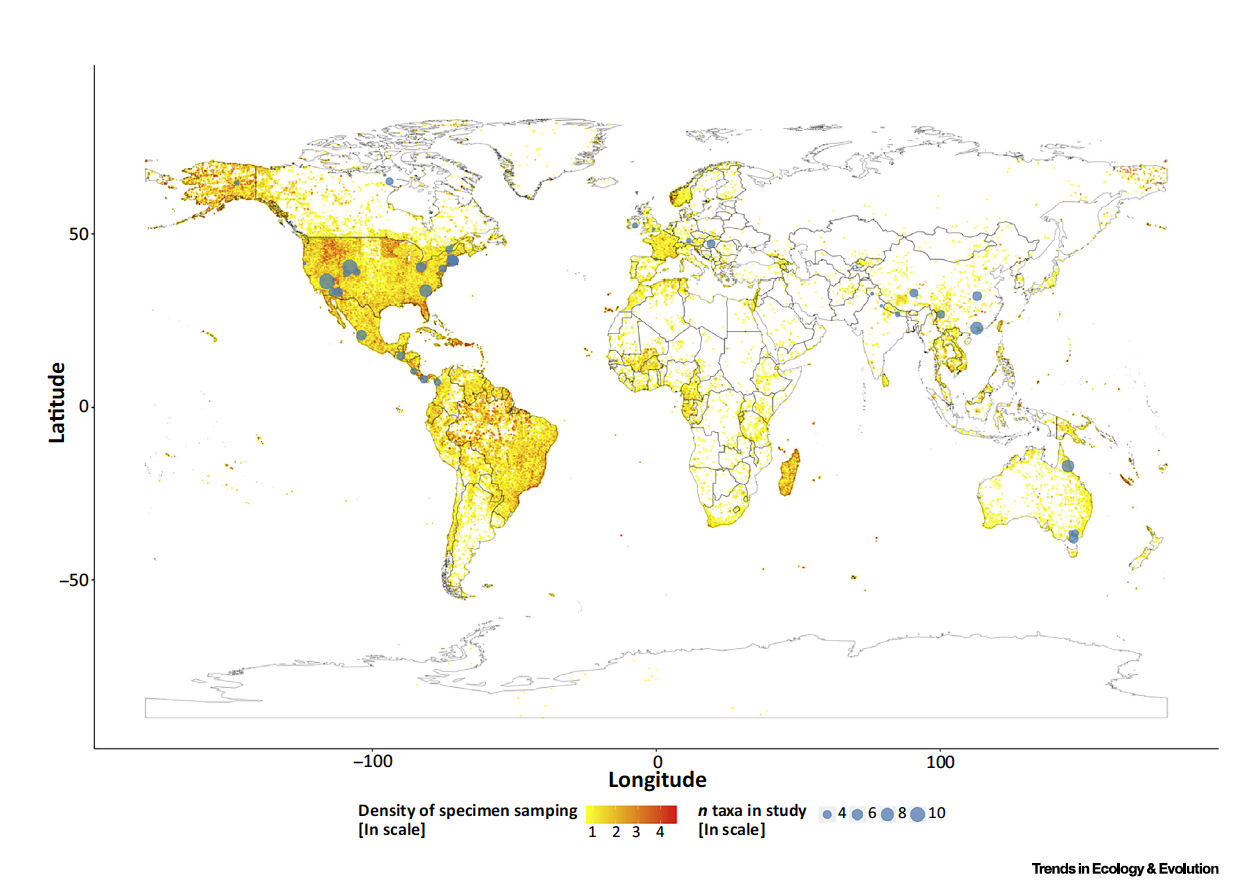 Willis et al. (2017) Figure 1, shows where previously published herbarium-based phenology studies have been located (studies are indicated with blue circles; the larger the circle, the more species sampled). The heat map shows the source of digitized specimens (available via the iDigBio portal), which included 1.8 million specimens as of February 2017!

We also discuss the future of herbarium specimens, with a special focus on the widespread digitization efforts currently underway. Digitized specimens are already being used by researchers to access more specimens in more locations than they could visit in person, and to use citizen science efforts to identify phenological stages online. Lastly, we review the biases inherent in using herbarium specimens, from those that arise during collection, to digitization, to observation.

CrowdCurio is a web-based platform for identifying phenological stages on digitized specimens. In this case, citizen scientists could identify buds, flowers, and fruits on a lowbush blueberry specimen.

For our part, we plan to continue using herbarium specimens--including digitized specimens--to improve our understanding of species-specific effects of climate change, in both spring and autumn!
Posted by Amanda at 2:15 PM No comments:

Here are a few recent pieces relating to Thoreau, climate change, and the Primack lab. 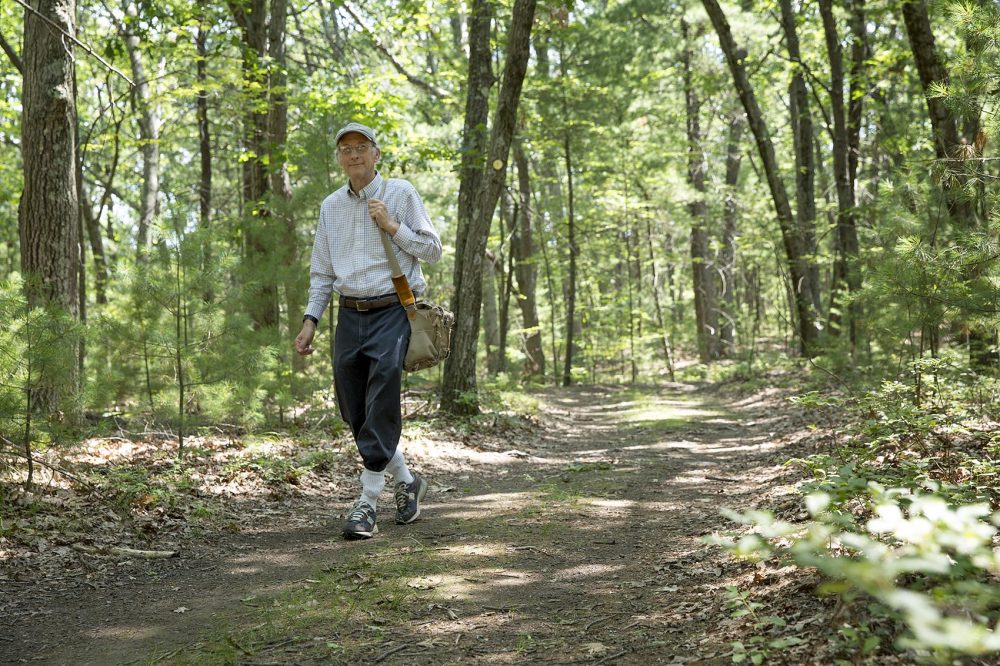 How Thoreau Helped Make Walden Pond One of the Best Places to Study Climate Change in the U.S.

On July 12, Richard Primack was interviewed on National Public Radio for the program Morning Edition by Bob Oakes about research in Concord.

On June 28, Primack was interviewed on National Public Radio for the series Climate Change in Massachusetts by Carey Goldberg about the new program at the Cemetery using citizen scientists to monitor tree phenology. 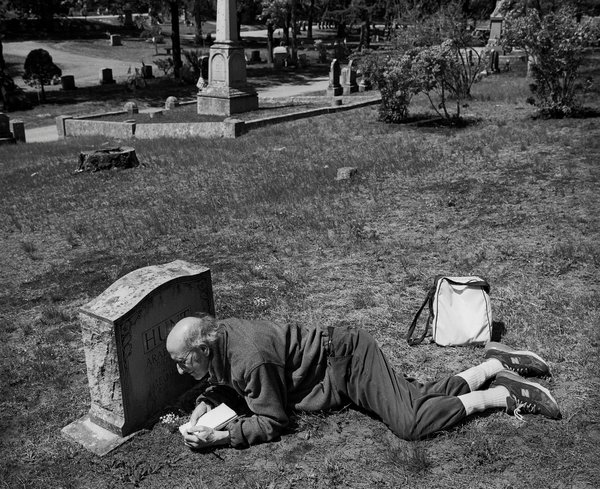 A picture of Primack taken by Sam Walker was a featured on the New York Times Learning Network. 510 people submitted comments on what Richard Primack was doing in the picture shown above. Most people thought he was mourning his dead wife. In fact he is recording the flowering time of bluets. The picture is staged as Primack always wears a hat in the field, and he never lies down when doing fieldwork, in part due to concerns about ticks.

Posted by Amanda at 9:13 AM No comments:

Thoreau as a Scientist


“Science is always brave, for to know, is to know good; doubt and danger quail before her eye.”
-Thoreau, in Excursions 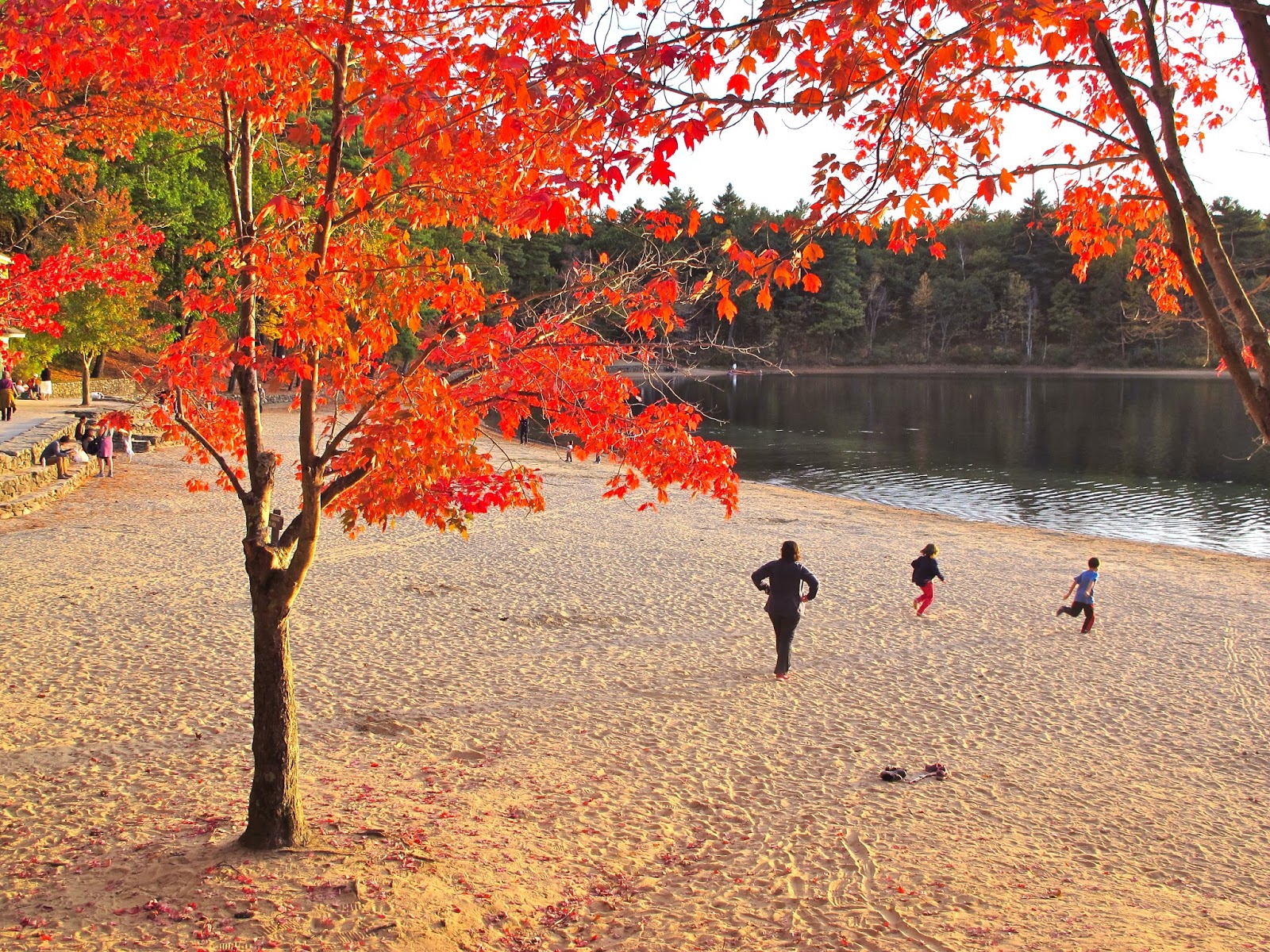 In the article Thoreau As Naturalist: A Conversation With Four Authors from the July-August issue of American Scientist, Dianne Timblin interviews four authors, including myself (author of Walden Warming: Climate Change Comes to Thoreau’s Woods), on the importance of Thoreau as a scientist and naturalist. The other authors are:

Richard Higgins, author of Thoreau and the Language of  Trees

A key theme of the article is that Thoreau clearly wrote about the connections between science and larger social, political, and intellectual subjects. His views remain highly relevant to important issues facing modern society such as human health, sustainable development, environmental protection, and climate change. 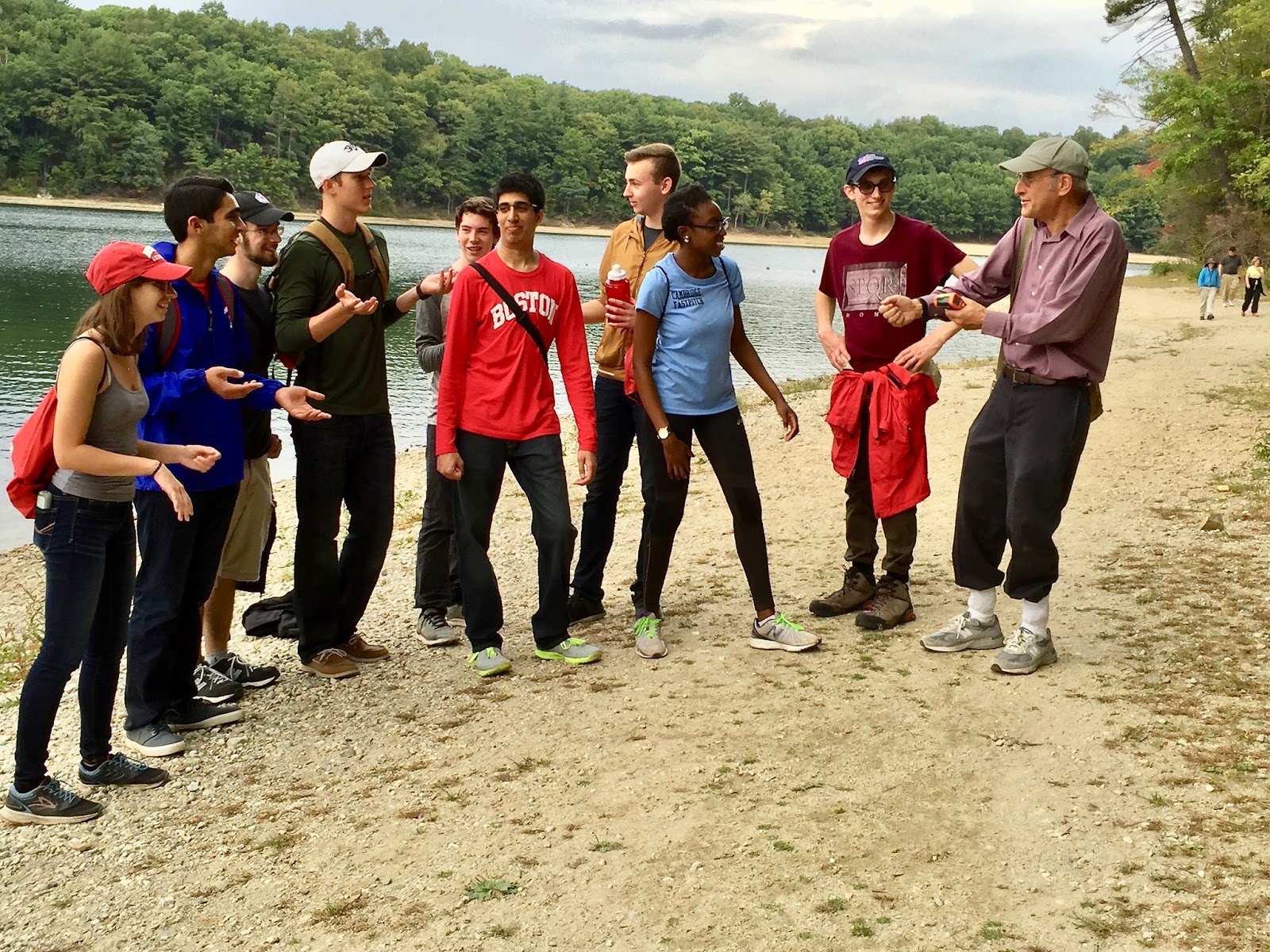 Richard Primack and group of BU freshmen discuss the importance of Thoreau to climate change research
Posted by Amanda at 6:20 AM No comments: