"You must live in the present, launch yourself on every wave, find your eternity in each moment. Fools stand on their island opportunities and look toward another land. There is no other land; there is no other life but this..."
-Henry David Thoreau in his Journal, April 24, 1859

On a recent visit to Thailand, I got the chance to explore the karst islands of Ao Phang Nga National Park. Karst islands are formed by tectonic activity lifting limestone out of the sea, followed by chemical and physical weathering that creates a highly varied landscape. 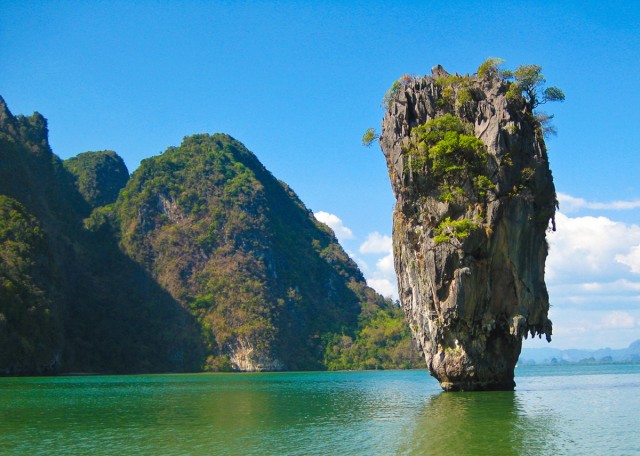 The most famous karst in Phang Nga Bay is Ko Tapu, or James Bond Island, which was featured in The Man with the Golden Gun. Photo from TAT.

A single karst island can contain a broad range of microclimates, geological features (such as caves and cliffs), and soil properties. In Phang Nga Bay, many karst islands are located next to native mangrove forests, further expanding the range of local habitat types, and wildlife that visit karsts. 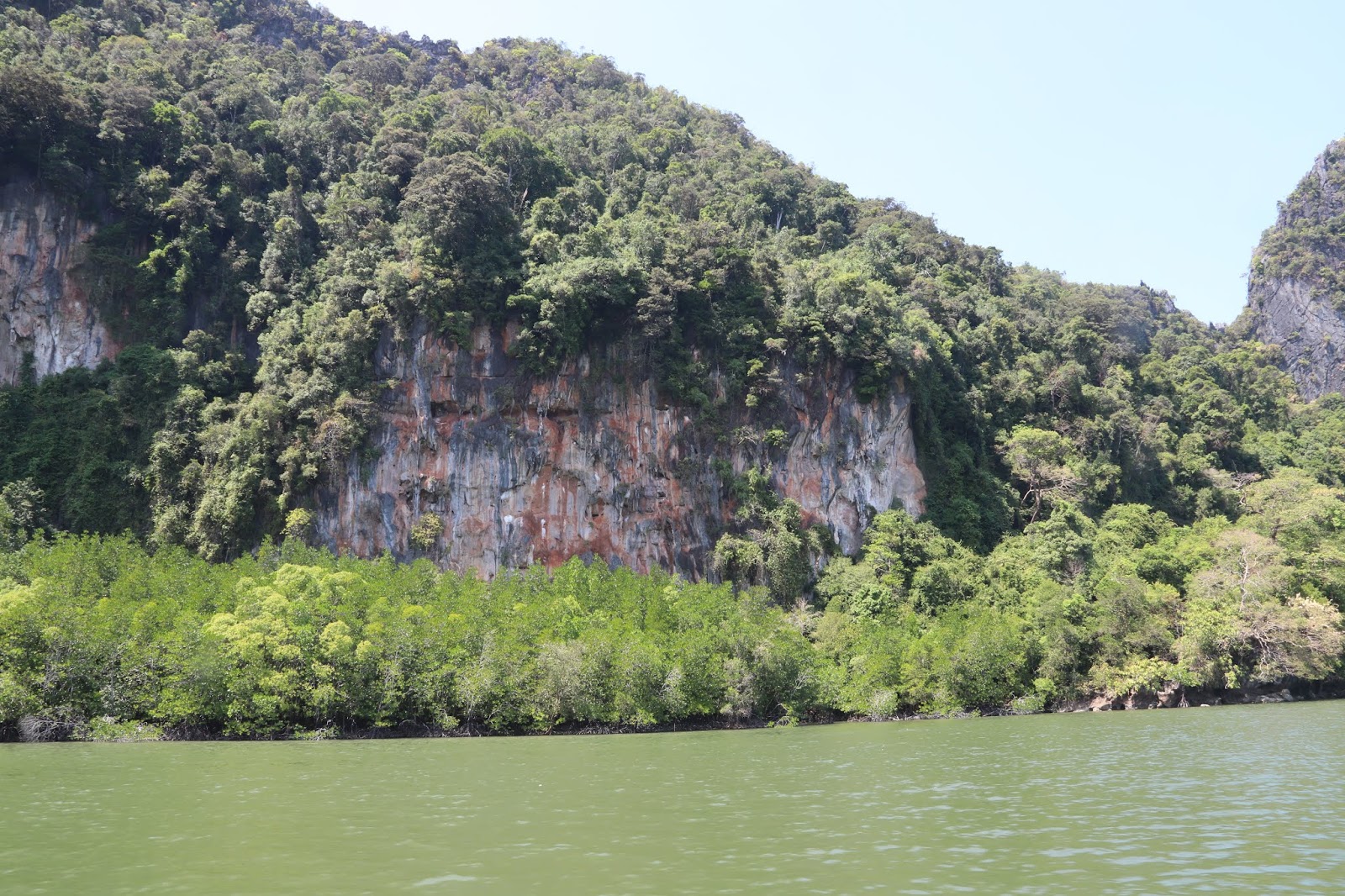 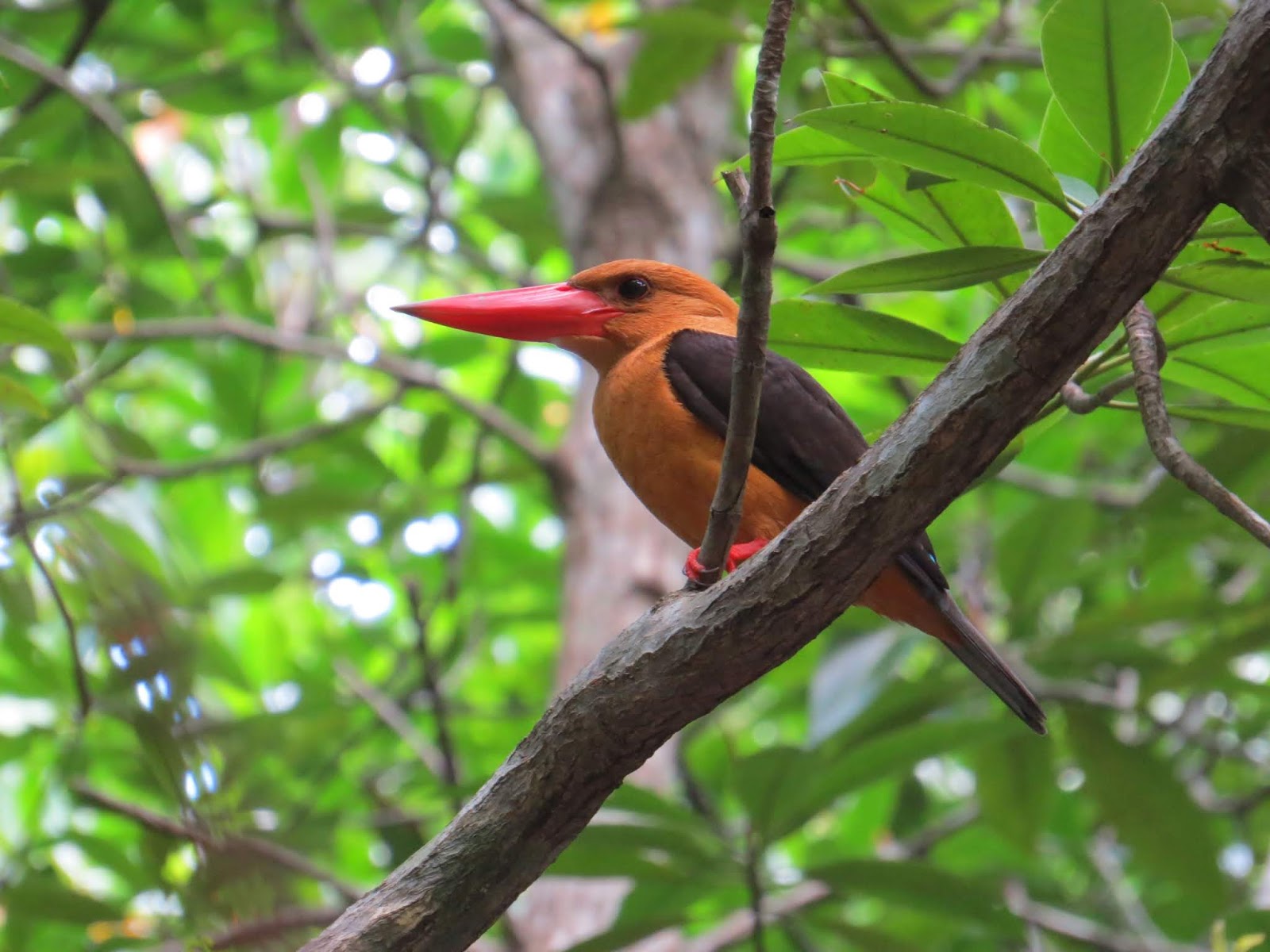 Spotting this Brown-winged Kingfisher in a mangrove in Phang Nga Bay was a highlight! Photo by Sam Roberts.

The varied landscapes of karsts are reflected by a striking amount of biodiversity and endemism. Many karst species are highly specialized, such as plants that grow on thin, alkaline soils, cave- and tree-dwelling bats, and invertebrates that either depend on bat guano for food, or in some cases are completely restricted to life on guano piles! 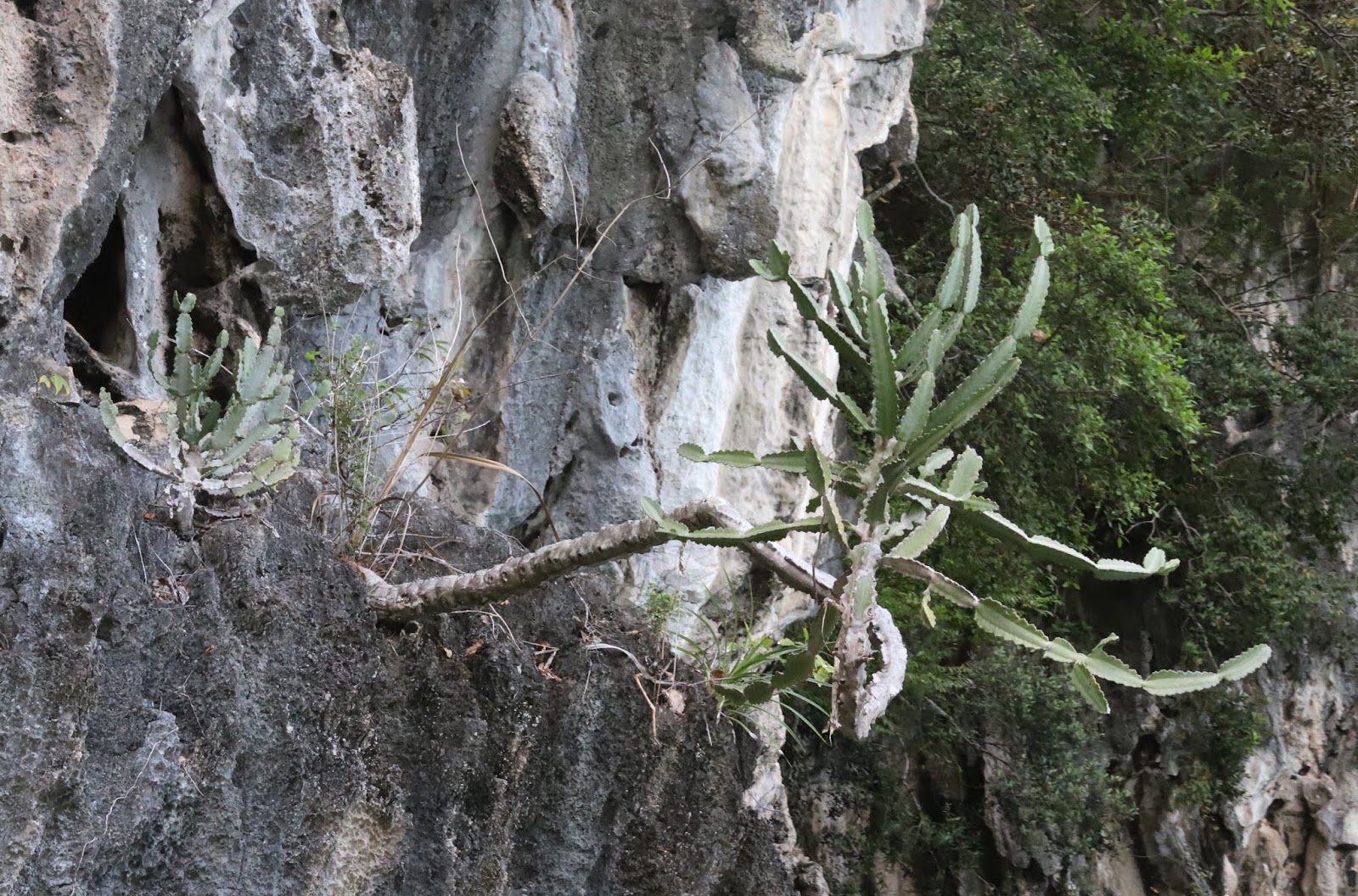 In addition to many plants and insects, our group observed bats, macaques, and even Oriental Pied Hornbills on the karst islands of Thailand.

Large fruit bats that roost in the trees atop a steep karst island in Phang Nga Bay can occasionally be seen leaving the island at dusk in search of food. This individual was filmed at Mu Ko Similan National Park (northwest of Phang Nga Bay), preparing to roost after a night out foraging. Video by Sam Roberts.

To learn more about the value of karsts as biodiversity hotspots in Southeast Asia, as well as threats to karsts from human activities like resource extraction and development, check out this article by Clements et al. (2006) in Bioscience.
Posted by Amanda at 10:03 AM No comments:

Evergreen gardens spruce up the winter


“Who leaves the pine-tree, leaves his friend, Unnerves his strength, invites his end.”
Ralph Waldo Emerson.

Evergreens keep gardens beautiful during the cold of winter. Their needles, leaves, and berries provide color and a striking contrast to the snow. As described in a recent article in the Newton Tab, throughout the year, green walls of evergreen trees reduce noise and offer privacy in Boston’s suburban communities. 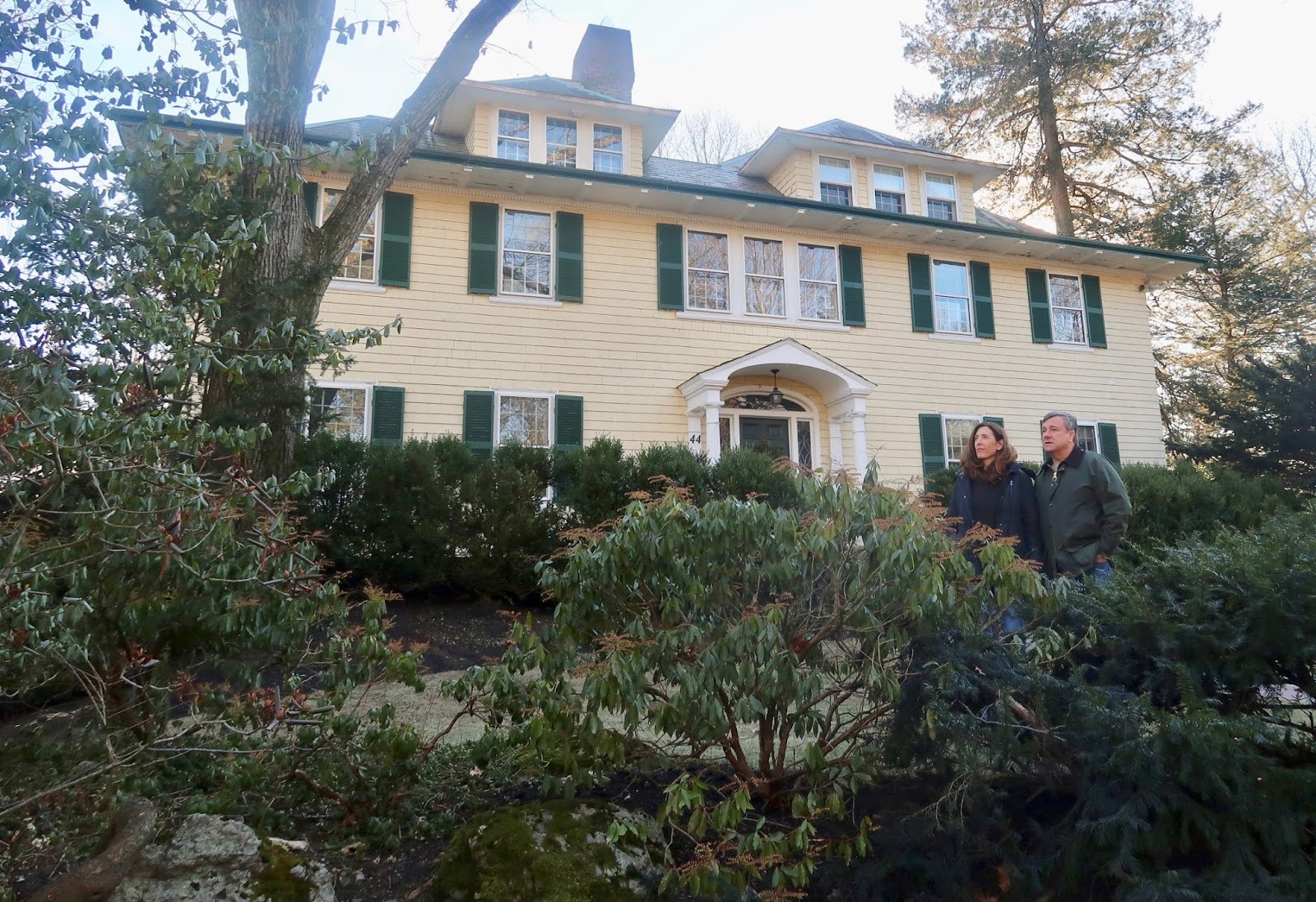 Susan and Steve Kern in front of their Newton home.

In the Ledges neighborhood of Newton, an abundance of evergreens combines effectively with natural puddingstone outcrops.  Between Newton Center and Crystal Lake, Jan Shifren and John Harrington enjoy a garden designed 27 years ago by Jan’s mother. 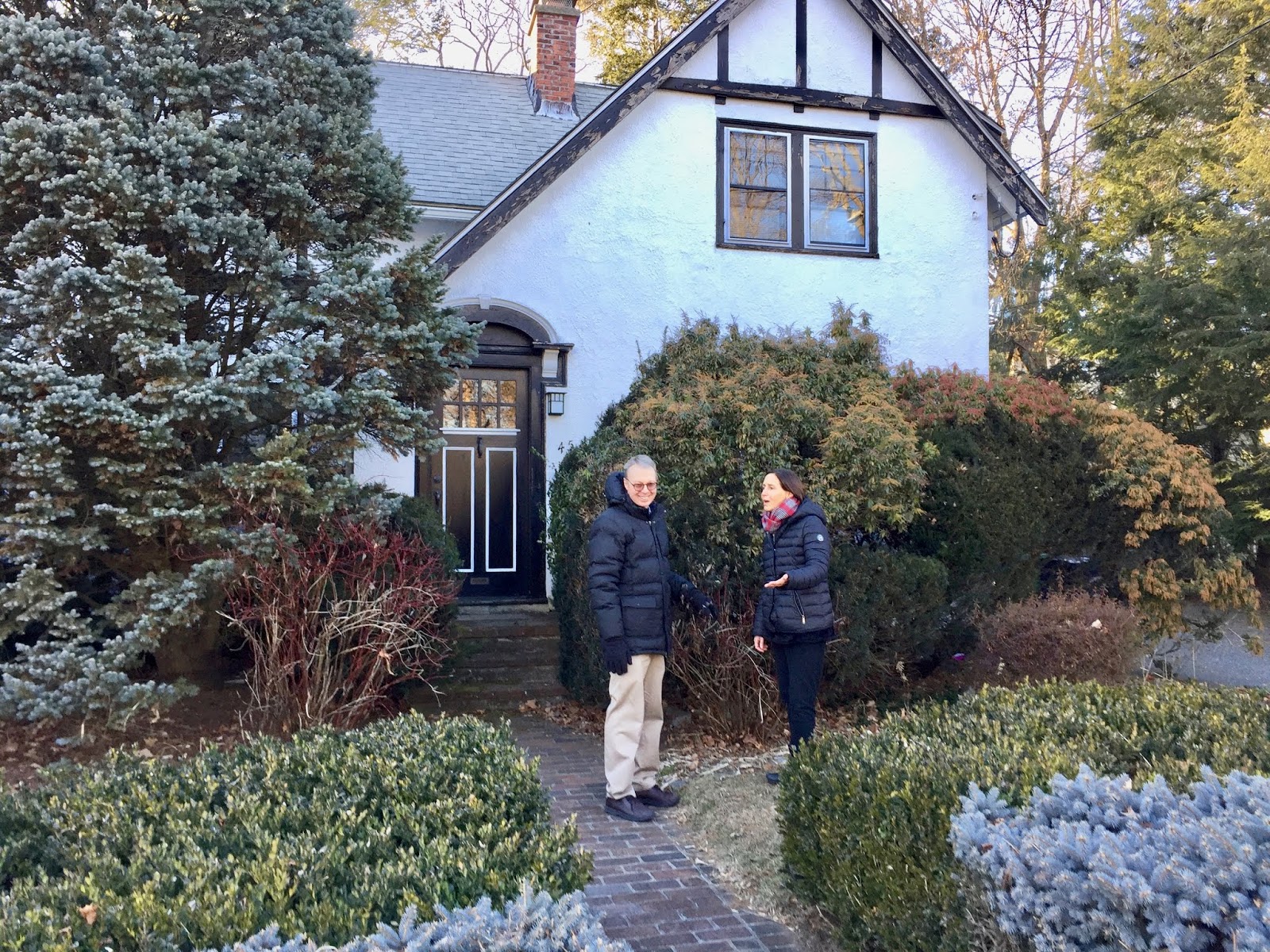 We should also take a moment (or many) to appreciate the color, function, and joy that evergreens bring to our gardens, especially when it is wintery cold outside and other plants have retreated for the season.

Climate change is shading out forest wildflowers in Thoreau’s Concord

A man can never say of any landscape that he has exhausted it.
—Thoreau in his Journal. 1850.

Many spring wildflowers in New England flower and leaf out in April before the trees start leafing out. This period of a few weeks of full sunlight is crucial for the wildflowers — the high light environment provides the energy for growth, flowering, and fruit production. In the past, our lab has shown that spring flowering and leaf out for wildflowers and trees are occurring earlier now than in Thoreau’s time.


In a recent paper, we’ve compared the rate of change in tree leaf out (days/°C) to the rate of change in wildflower flowering (days/°C). To our surprise, we found that trees are more responsive to a warming climate than wildflowers, with trees leafing out 2 weeks earlier now than in the 1850s when Henry David Thoreau was recording phenology, whereas wildflowers have only shifted by one week earlier.  The result is that wildflowers now have one week less of full sunlight in the spring before the tree produce their leaves.


This loss of energy reserves means that many wildflower species may not have enough energy to mature their fruits and produce flower buds for next year. Further, many of these species will have a reduced chance of growing and surviving in these habitats in coming decades.