With our research in phenology, we are currently most interested in the bookends of the growing and breeding seasons, spring and fall, here in Massachusetts. That leaves the summer which, with the exception of Caitlin working away in Acadia, is our time to catch up on writing, attend conferences, and spend time with our families. With parents and a partner out west, I spent the month of July working from sunny California!

Okay, I actually spent the month in foggy Marin County, at Point Blue Conservation Science's Palomarin field station-- or as many call it, Palo. Palo, like Manomet in Massachusetts, is a long-term monitoring station on the coast; biologists have been banding birds at Palo year-round since 1966. In the breeding season, another group of Palo biologists maps nests and territories of breeding birds on the grounds, even banding nestlings for a long-term genealogical data set. Many of the biologists that do this work are interns, hired on for a season to learn current bird monitoring techniques. That was me, for most of 2011. I loved being an intern at Palo, and in addition to bird ID and bird monitoring, Palo taught me the value of observation and natural history knowledge in conducting good science.

Me holding a banded Townsend's Warbler, 2011

So I returned to Palo this July to live with friends, read and write about phenology, and to do some songbird banding! We opened our mist nets 15 minutes after sunrise and closed them 6 hours later, checking for birds every half hour in between. Palo has 14 net locations that range from coastal scrub habitat to douglas fir forest and now, at the tail end of the breeding season, we were catching lots of recently-hatched birds and adults that were finishing up breeding and just beginning to molt. We caught between 20 and 60 birds most days, primarily Swainson's Thrush, Wilson's Warblers, Song Sparrows, Wrentits, and Selasphorus Hummingbirds. It was great to be back.

Juvenile Wrentit, banded and returned to the nest as part of Palo's nest searching program

So, if you ever find yourself in Marin County, I strongly recommend a visit to the Palomarin field station!
(Photographs courtesy Sam Roberts)
Posted by Amanda at 1:54 PM No comments:

Our research on climate change, Thoreau and Concord has expanded over the past few years to include a wider range of people and field sites. With the Concord Museum and curator David Wood, we began to more explicitly connect history and climate change biology, resulting in the current exhibit. In another collaboration, we have been working with Jane Marsching, a professor at the Massachusetts College of Art and Design and a media artist, to connect themes of art and science. Together we launched a user-friendly version of NELOP, the New England Leaf Out Project, that requests people to contribute observation on the leaf out times of common tree species. 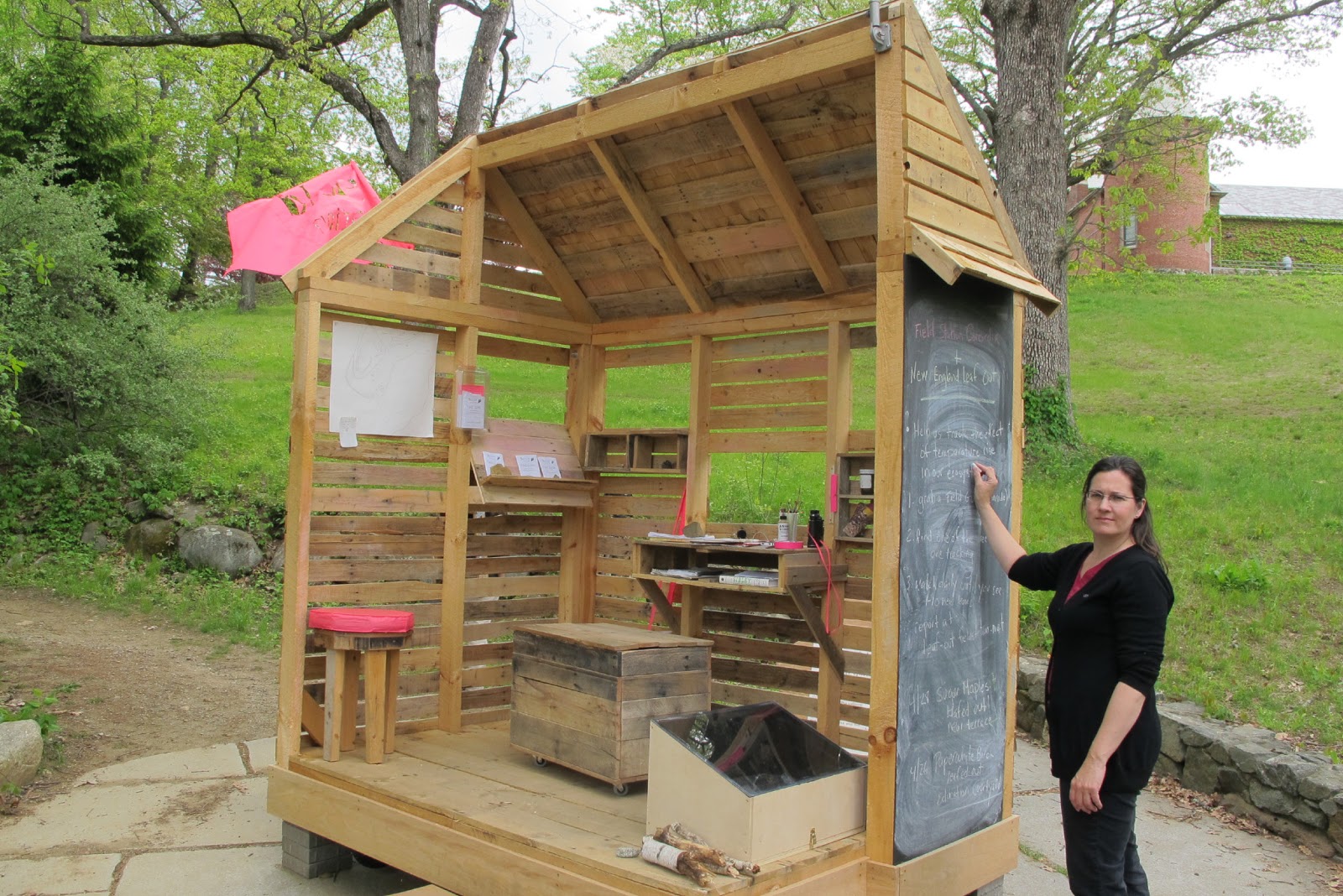 “a platform for data collection, community gathering, citizen science, handmade and digital explorations of plant and animal life, and a conversation full of questions about the vibrancy of matter and our role in the stresses and resiliences of ecosystems.”

This platform provides many opportunities for interaction with the artist and with the natural world.

For more information, check out:
http://www.fieldstation.net/ 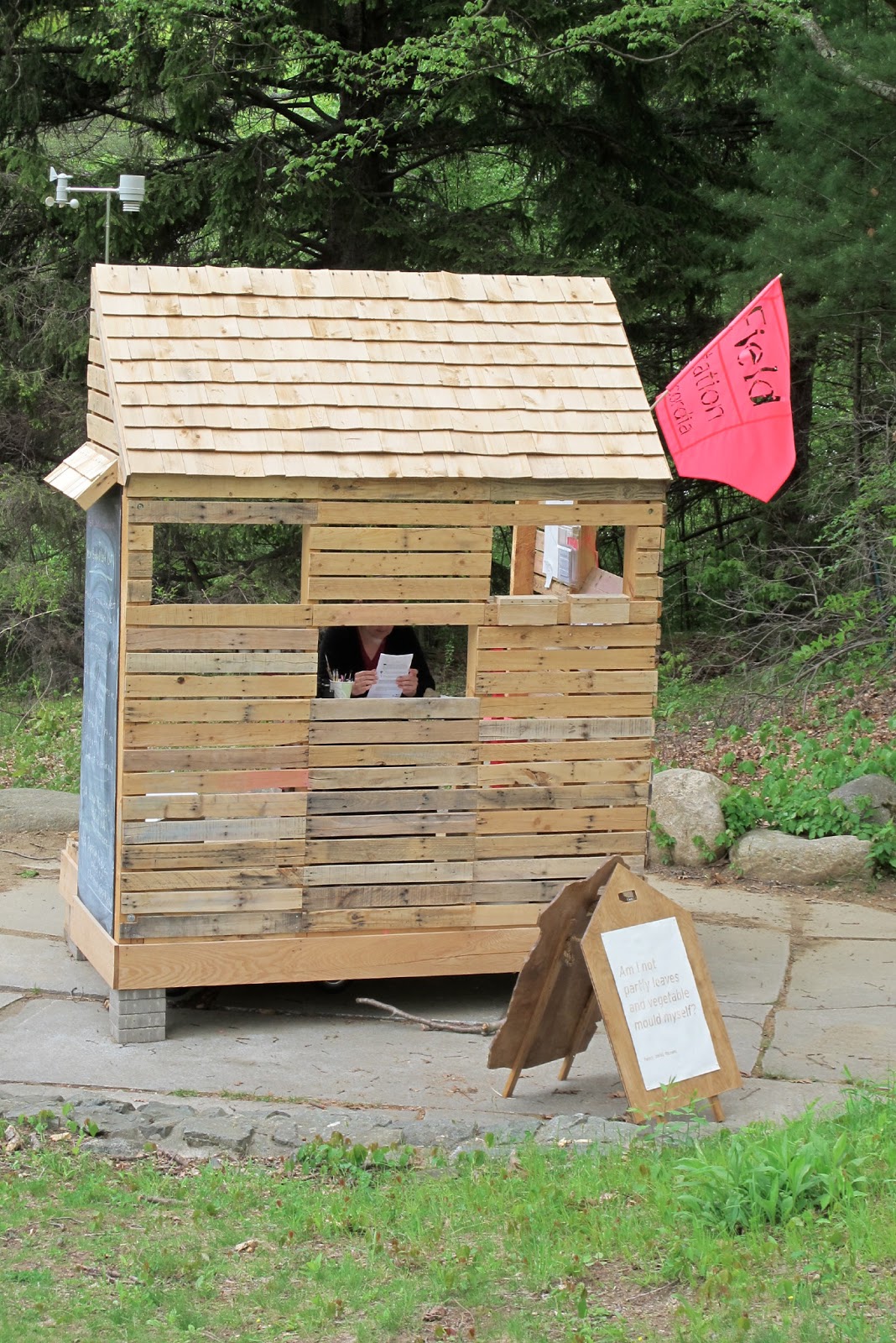 Jane Marsching in her half-scale version of Thoreau's cabin
Posted by Amanda at 2:15 PM No comments:

I've recently had the pleasure of visiting several Japanese rice paddy fields, known here as "tambo". Rice is a staple of the Asian diet and as such tambo play an integral part in the Japanese economy, culture, and ecology. As with many forms of modern agriculture around the world, there are different ways rice can be grown. Tambo dot the landscape of Japan, forming a matrix that demonstrates the differences in cultivation  - everything from traditional methods that often require a high level of manpower and minimal outside inputs, to high-tech methods that rely on automated machinery and a cocktail of fertilizers. The particular method of rice farming that a farmer chooses to employ has far-reaching effects from the quality of the rice itself, to the health of the ecosystem, and even to the impact of tambo on climate change. That's right - even rice cultivation can affect the climate and certain types can mitigate climate change. 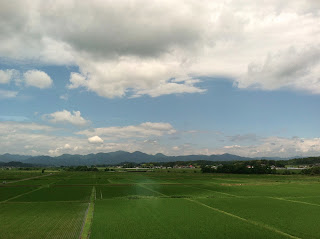 The most modern rice growing methods are often devoid of living creatures. Due to ecologically harmful inputs of fertilizers and pesticides, concrete infrastructure that make it difficult for organisms to move between irrigation troughs and paddies, and heavy machinery that stirs up fragile soil layers, modern tambo are relatively sterile environments.

A middle ground of tambo is organic methods. Here, natural additives are used at various times during the growing season in order to boost production. Even these methods though can result in anoxic (no oxygen) conditions as increased decomposition robs the water of dissolved oxygen that frogs, fish, and microorganisms depend on.

However, in northern Japan it is possible to grow rice completely naturally. Tambo that utilize this method resemble the most diverse of wetlands. The water teems with daphnia and you can't take a step through the paddy without numerous frogs scurrying away. Some of the most fascinating animals can be found here, including water spiders, mole crickets, and giant water bugs. These paddies are often flooded in the winter, making them ideal grounds for geese and other waterfowl that have faced habitat destruction throughout their range. And, you guessed it, these natural tambo are the preferred method when it comes to climate change mitigation.  They have many of the same benefits as wetlands and can store substantial amounts of carbon and methane. By working within the bounds of the ecosystem, farmers can create resilient tambo that can weather droughts and floods, store greenhouse gases and serve as an important habitat for plants and animals. 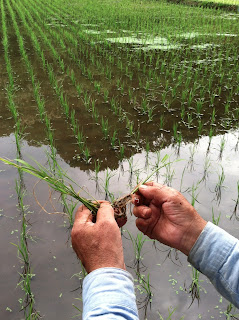 While rice paddies are not a substitute for true wetlands, when managed well they can feed a growing human population and provide habitat and ecosystem services all while having a net positive effect on the environment. Still curious about rice paddies? Check out this tambo NGO (and use your browser to translate it!).
Posted by .e.r.e. at 1:29 AM No comments: