What does the drought mean for Boston?

“There is now a remarkable drought. Many white birches long since lost a greater part of their leaves, which cover the ground.”
-Thoreau’s Journals. August 19, 1854.

Eastern Massachusetts is experiencing an extreme drought, with less than half the normal amount of summer rain. The average August temperature was 6 degrees Fahrenheit above normal, making it the hottest August on record. The combination of low rainfall and hot days has dried the landscape and stopped flows in streams and springs.

What does this mean to the plants and animals of the Boston area?

Unwatered lawns and playing fields are brown. Numerous shrubs and trees in yards and roadsides have died; many branches have withered. The forest has an autumn look as the leaves turn yellow. Wildflowers like hawkweed and aster have drooping leaves and have stopped producing new flowers. Even if the rains resume, it is too late for these plants; they are finished for the year. 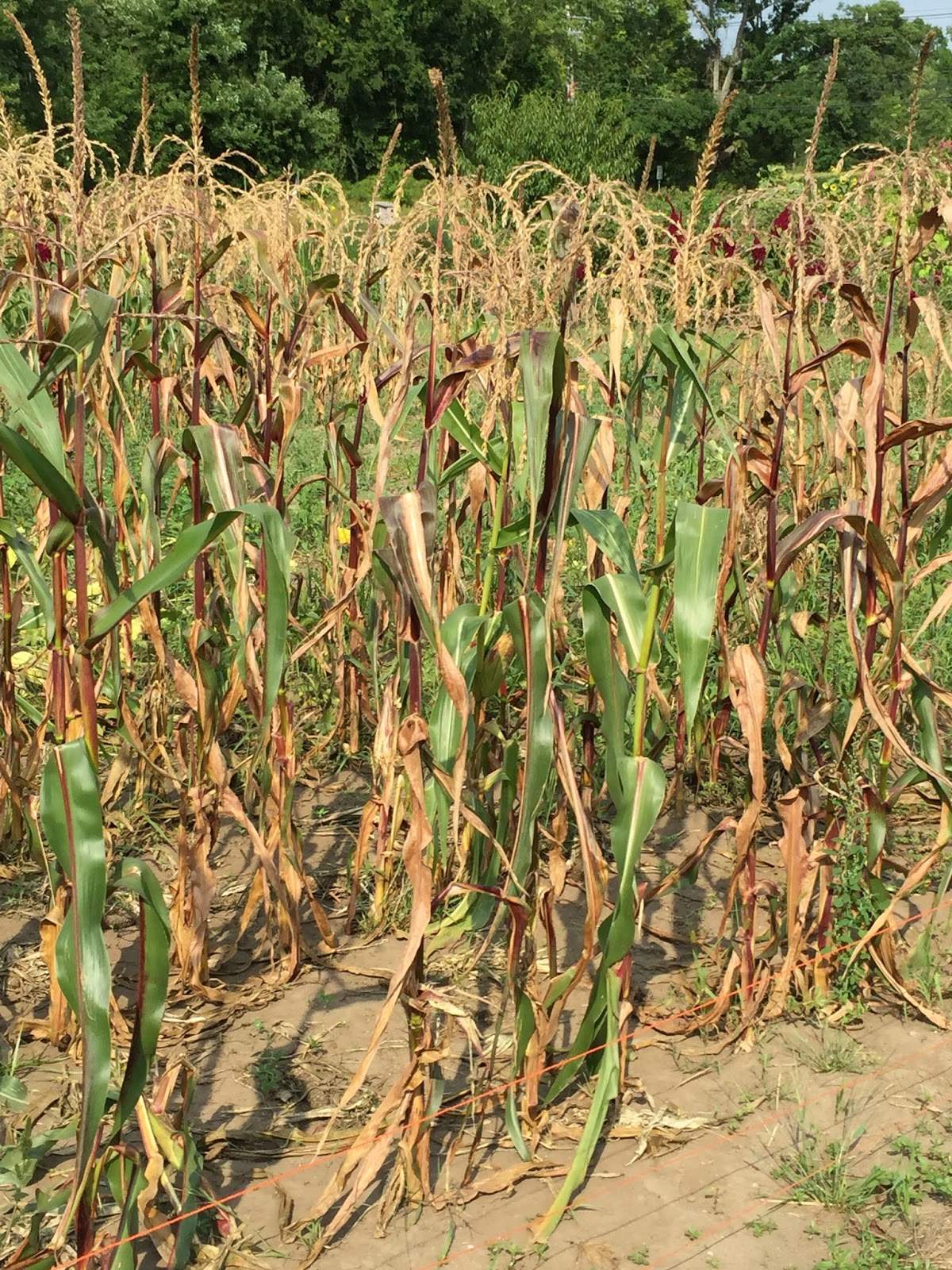 Corn drying out in an unwatered field

The lack of rain means that most of the young fruits and nuts have shriveled or fallen from shrubs and trees. Birds, squirrels, chipmunks and other animals have nothing to eat, and many birds have started their southward migrations earlier in the autumn, leaving the forests quiet. No rain also means no mushrooms; it is a terrible year for mushroom hunters.

Insects in our fields and forests are also faring poorly due to the dry conditions and lack of flowers. This year there are almost no mosquitoes and flies, and relatively few butterflies. Bees and other insects are concentrated in well-watered gardens where there are flowers. Hummingbird feeders are another center of activity, for hungry hummingbirds, woodpeckers, and wasps. 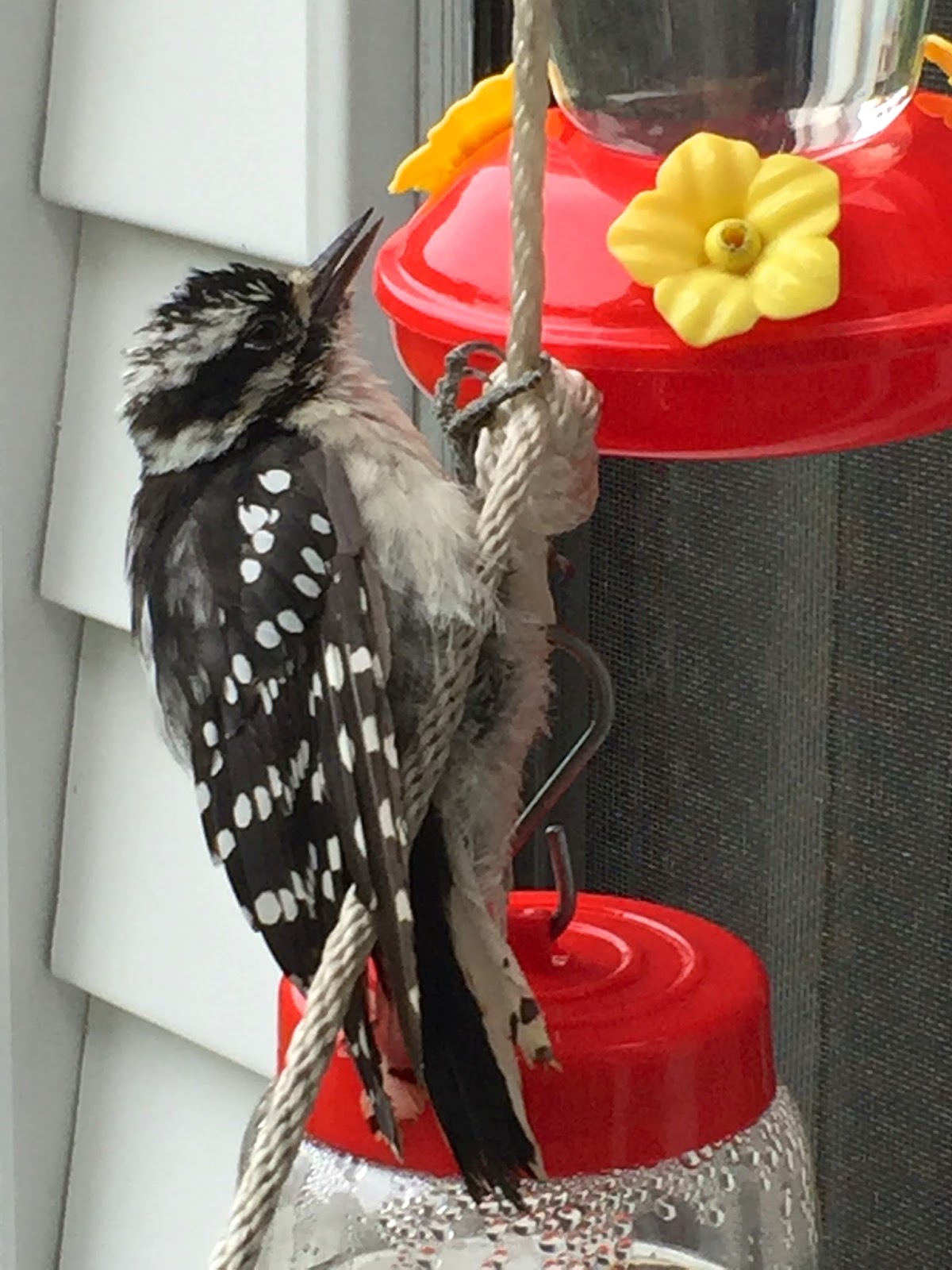 Downy Woodpecker at a hummingbird feeder

Extreme seasons and events such as the summer of 2016 show how a changing climate will affect the natural world and our lives, and provides an example of why we need to get involved to slow and stop (and unfortunately, adapt to) climate change.

Longer versions of this post were published in the Newton Tab and the Concord Journal.
Posted by Amanda at 6:25 AM No comments:

Posted by Jonathan Regosin (Massachusetts Division of Fisheries and Wildlife) and Richard B. Primack

“I am glad to recognize [a great blue heron] for a native of America—why not as an American citizen?”
-Henry David Thoreau

Compared to common red-backed salamanders, yellow-spotted salamanders are massive. They are 4-6 inches long, have the girth of an index finger, and look almost pudgy. People usually see adult spotted salamanders only on the first warm rainy nights of March, when they migrate to breed in vernal ponds—small ponds that dry out in summer and lack predatory fish. When the pools dry out in summer, the young salamanders depart for the surrounding forests where they burrow in the ground and are rarely seen. 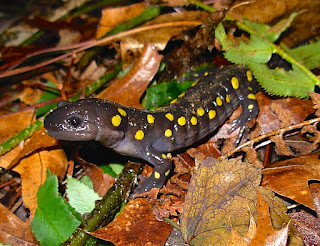 The future of Bare Pond and the surrounding upland forest habitat where adult yellow-spotted salamanders live, now hangs in the balance with the recent sale of a large part of the Webster Woods to Boston College. Developing any of the land just beyond the pond could directly harm spotted salamanders living in the ground and indirectly damage the water quality of the pond. Action is urgently needed to protect a unique natural area in the Webster Woods for the yellow-spotted salamander, other forest creatures, and future generations of Newton residents who enjoy nature.

A longer version of this article was published in the Newton Tab.
Posted by Amanda at 12:21 PM No comments: