Where you go, I will follow (at a cost)

“Go confidently in the direction of your dreams. Live the life you've imagined.”
-H. D. Thoreau

An article written by Richard Primack and Virginia O’Leary in 1993 surveyed ecologists to elucidate why female ecologists experience lower productivity and promotion than male ecologists. Unsurprisingly to most people today, they found that women in science face many disadvantages, including lower salaries, primary family care responsibilities, lack of role models, lack of job security, lack of mobility, and more. Taken together, these disadvantages can add up to large gaps between the scientific achievements of women and men.

I was particularly struck by the sections of the article discussing women’s lack of mobility in pursuing jobs. Many women reported being unable to move for a career opportunity due to a significant other or needing to relocate to accommodate a significant other’s career goals. One woman surveyed for the study reported, "It took me too long to get my degree as a result of following my husband around. When I finally got my degree there were no jobs where he was." 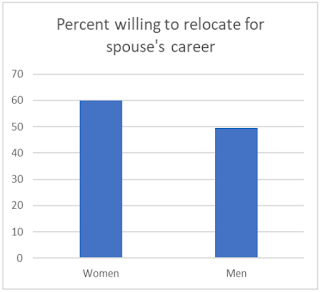 Women also reported having a relationship end or suffer because of a move for a job opportunity. Another woman quoted in the study said, "I left my significant other to complete graduate school. I now have no relationship and no job." 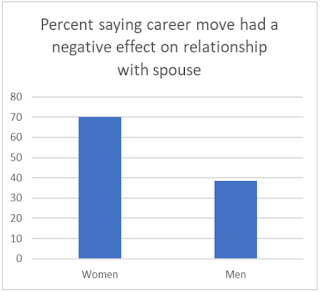 This article was published the year I was born, and yet I find that our societal expectations for women and men are slow to change. Even among friends of my own generation, more (heterosexual) women than men have moved to locations optimal for their partners’ careers.

These observations also highlight how important individual actions can be. One man’s actions can impact a woman’s career. Men can choose to support the women in their lives and to equally share the responsibilities and sacrifices.